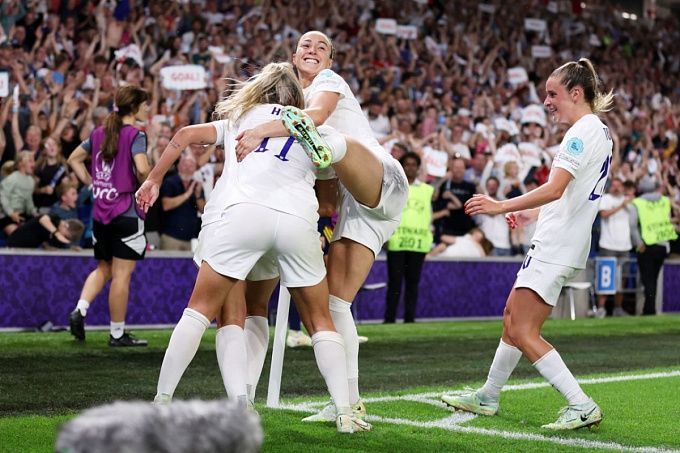 Team England is one of the strongest national teams in the world, but they have never won a title in major international tournaments before. At the world championships, the Lionesses can boast only a bronze medal in 2015, and at the continental tournaments in 1984 and 2009, they took silver medals. And now at home at Euro 2022, the British aim to reach the title for the first time. At the group stage of the tournament, they took turns beating Austria, Norway and Northern Ireland with a total score of 14-0. However, in the quarter-finals they almost made an upset, losing to Spain 0-1 by the 84th minute, only to level the score and snatch victory in overtime, 2-1.

Team Sweden has been clutching medals at major international tournaments nearly every time. Especially successfully the Scandinavians hold the continental championships, where they have participated ten times: once they were champions, three times — silver medalists, four times they won bronze, and were left without awards only twice. At Euro 2022, the Blue and Yellow started with a 1-1 draw with the Netherlands then managed to beat Switzerland and Portugal, 2-1 and 5-0, respectively. In the quarterfinals, the Swedish athletes could not crack the defense of the Belgian national team for 92 minutes, beating them on shots, 34-3, but the only goal was scored in the second extra minute, 1-0.

Throughout history, the teams played 13 head-to-head encounters. The Lionesses have scored three wins, the Blue and Yellow have been stronger on eight occasions, and two games ended in a draw. The last time the rivals met was in the battle for the bronze medals at the 2019 World Cup, when the victory was celebrated by the players of the Swedish national team, 2-1.

Teams England and Sweden had a great group stage of Euro 2022, but had a surprisingly hard time getting a positive result in their quarterfinal matches. Now they will face each other in the semifinals, where the chances of success are seen better in the tournament's hosts. First of all, in the last game they showed their character and proved that they can change the course of badly played matches. Secondly, the overcrowded stands will push them forward, providing them with additional energy and excitement. As a result, we can’t help but consider a bet on the victory of England at odds of about 1.90.

We should not expect that in the upcoming match the teams will launch one dangerous attack after another from the very first minutes of the confrontation. Even at the quarterfinal stage, playing with more modest opponents, the English and Swedish players were trying to get throught their defense for a long time, and therefore the productive actions began to occur only at the end of the second half. And now the women will begin the semifinal battle with maximum caution, understanding the strength of each other, so we are unlikely to see goals in the opening game. Proceeding from it, the optimal variant to bet on seems to be the fact that the first goal in the match will take place after the 30th minute with the odds about 2.10.

Bethany Mead is the main hope of England at Euro 2022. While the 27-year-old does not play in the position of a central striker, she is the top scorer of the national team. She has already scored five goals and two assists in four games. Such a solid performance should not be surprising, because last season for London's Arsenal, she spent 22 games, in which she marked with 11 goals and eight assists. Obviously, she is in great shape, so it is worth looking at the bet on Bethany Mead's goal with the odds of about 3.00.

Our prediction: England will win for 1.92 at 1xbet.