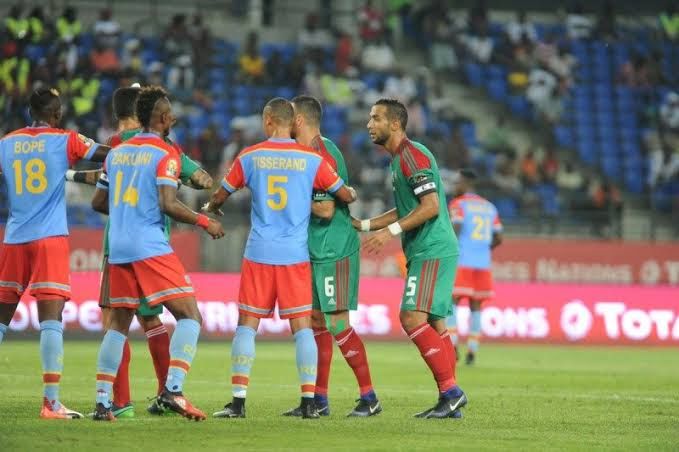 The race to witness the greatest tournament in the history of soccer resumes as DR Congo host the North African side of Morocco at the Des Martyrs Stadium on Thursday. The home team have been looking to book their place in the tournament since 1974, however, the visiting team are a regular participant and will hope to grace the event next year. Can the home team qualify this time?

Hector Cuper's team qualified for this phase after topping Group J with eleven points ahead of Benin and Tanzania. They won three games in that process, drew two and lost just once to secure the ticket for the playoffs.

They are blessed with experienced star players like Bakambu, Yannick Bolasie , Mbokani and Westham's left back Masuaku, these players can cause any team problems and the visiting team should be wary.

They have managed to win three matches out of five they have played, that's nine points from a possible fifteen.

They are presently ranked 66th according to FIFA.

The Atlas Lions head into this game after a disappointing quarter finals exit from both AFCON and FIFA ARAB CUP in the hands of their fellow Northern African team Algeria and Egypt respectively. They face one of the toughest tests against DR Congo on Thursday before a return leg later this week.

Their last match against Egypt ended in a 2-1 defeat despite going ahead in that encounter, Mohammed Salah equalized in the 50th minute before providing Trezeguet with the assist to see off Morocco after extra time.

Lots of concern for Halilhodzic as he will be missing lots of key players like Hakim Ziyech , Noussair Mazraoui and their main players Boufal and Chakla.

Morocco are currently 24th on FIFA ranking and have lost just once, won three and drew one in the last five matches. They are the 2nd best team in Africa and still have enough players to get results against DR Congo.

Both teams have met three times, Morocco won once while DR Congo boast of a win and one ended in a draw.

Morocco is more than sufficient to qualify for the next round but DR Congo won't make it susceptible for them because every team's ambition is to grace the World Cup tournament.

The qualifying stage was a smooth sail for Morocco, scoring 20 goals and conceding just once with eighteen points from possible eighteen available points, they were the overall best team in that phase.

This is a fierce contest between two tough teams but Morocco is a top top team with a combination of experienced and young players, it's going to be tough away from home but they will scale through, bet on Morocco and over 1.5 for 3.30.

Not underrating the home team but no chance for them here, bet on Morocco to win either half for 1.74.