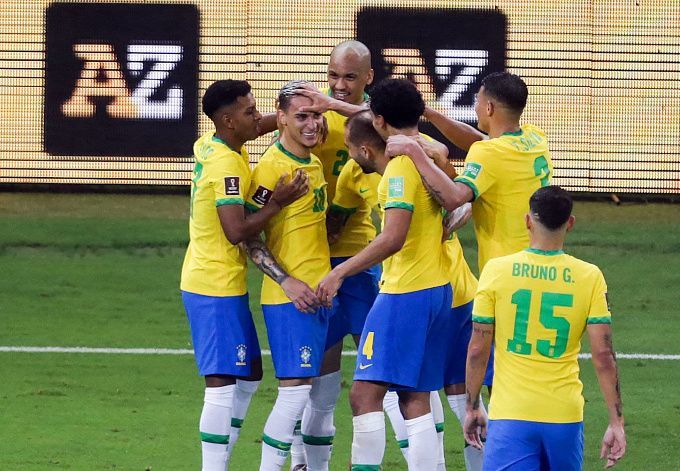 The Brazilian team is the main favorite in Group G and the World Cup in Qatar in general. At the same time, Group G is deadly dangerous because there will be two European teams from Switzerland and Serbia, as well as a strong African Cameroon, one of the continent's strongest teams.

Brazil vs Serbia on November 24

On November 18, the Serbs played a friendly against Bahrain away and defeated them 5:1. Tadic scored twice, and Vlahovic, Duricic, and Jovic each sent a goal. Before that, the Balkans had a five-match losing streak, so the Serbs are in great shape and can afford to take on the most titled team in the world.

The Brazilians did not play in November, but in September, they played two friendlies against Ghana and Tunisia; both were blowouts. The Brazilians have a 15-match unbeaten streak that began in September 2021. We have two productive teams in good shape and with high motivation. The upcoming game will be packed with goals.

Brazil vs Switzerland on November 28

The Swiss played a friendly against Ghana on November 17, losing to the Africans 0:2 and thus disappointing their fans. However, it is not worth paying much attention to the friendly, especially since the Swiss team conceded both goals in the second half after several substitutions. Recall that the Swiss team had a three-match winning streak in the Nations League before that match. In particular, the Swiss defeated the Portuguese, the Spaniards, and the Czechs. In fact, we cannot say that the first two were weaker. Instead, these three teams are of the same level.

Brazil is reaching outstanding results, and their defense is helping them. The Brazilians conceded only two goals in friendly fixtures in the last seven games. At an official level, the Brazilians have a three-game winning streak. The Swiss are a more closed team than the Serbs, and the last two head-to-head meetings between Brazil and Switzerland could have been more productive.

Cameroon vs Brazil on December 2

Cameroon and Brazil have played each other five times: +4=0-1 in favor of South Americans. At the World Cup, they met twice, and both meetings for the Cameroon team ended in devastating defeats. Much evidence suggests that this trend will continue. The Brazilians are in great shape and have a long positive streak. Meanwhile, Cameroon lost to Uzbekistan and South Korea in the last four meetings and played in a draw with Jamaica and Panama, scoring only twice in this period.

Also, the Brazilians have won the last seven meetings. By the way, they destroyed six opponents, including South Korea. The teams' class is different, so another victory for Brazil is expected.

Group G is probably the strongest one. But there is little doubt that the Brazilians will meet the challenge and not only make it to the playoffs but do so from first place. With all due respect to the Serbs and Swiss, Brazil outclasses them, not to mention the team Cameroon, which is going through not the best time.

Neymar is the brightest star of the Brazilian team, and it is not surprising that the PSG striker is on many World Cup charts. Neymar shares the 3-4 places with Messi in the Topscorer list (12.00 on betking), second only to Kane and Mbappe. In the Ballon d'Or category, the PSG player is in the third position (10.00 on betking), behind Messi and Mbappe. In the Top Assistman list, Neymar is second (6.00 on betway), behind Messi. The Brazilian will likely win at least one of the individual trophies.

We should also highlight Real Madrid's Vinicius Júnior (26.00 on betway) and Barcelona's Rafinha (34.00 on 1xbet). Both are among the top 10 contenders for the Ballon d'Or, ranking 7th and 9th, respectively. Of course, we can't overlook Brazilian goalkeeper Alisson Becker, the leading contender for the Golden Gloves (5.50 on bet365).

The Brazilians came to Qatar as favorites, so the bookmakers' quotes are logical and understandable. In recent results, only the Argentines can compete with the Brazilians. But most European teams this year needed more stability. Well, maybe only the Dutch are noticeably inferior to the Brazilian team in terms of composition. We consider the Brazilians the favorites of the World Cup in Qatar and expect them at least in the semifinals.