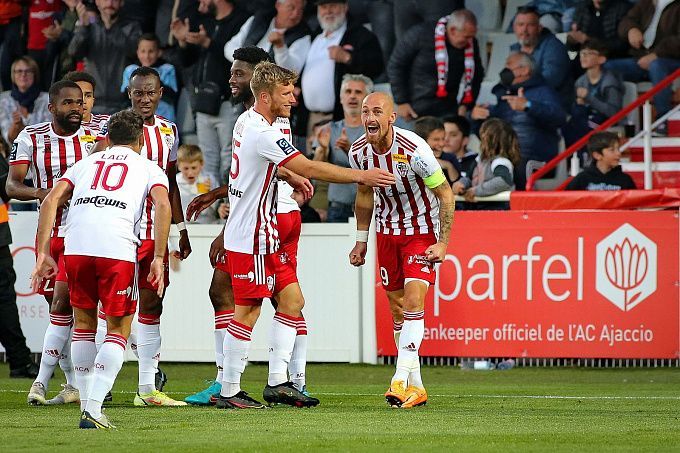 Ajaccio and Lance haven't played each other for more than two and a half years, and before that, the teams met in Ligue 2. What will be the first confrontation in a long time in the top division of French soccer like?

Ajaccio finished second in Ligue 2 last season, qualifying directly into the elite of French soccer. It isn't easy to set any ambitious goals for the newcomer to Ligue 1, and the main thing now is to maintain a place in the top division. The Bears have strengthened both their defense and attack, with the major acquisitions being Thomas Mangani and Romain Hamouma, who previously played for Angers and Saint-Etienne. Kevin Spadanuda, who scored 18 goals for Aarau in the Swiss First Division last season, will also be interesting to watch. The Bears were short of achieving forwards, as 37-year-old Riad Nouri was the club's top scorer last season, with nine goals in 38 games. By the way, Hamouma got a red card in the last matchday, and he will not play against Lens.

Ajaccio has won two victories in five friendly matches and suffered two defeats, tying the game with Lorient in a friendly (1-1). The start of the championship was disappointing: Olivier Pantaloni's players lost away to Lyon 1-2. By the 22nd minute, Corsicans conceded two goals, but soon the intrigue was revived: the opponents were left in the minority, and Thomas Mangani converted a penalty. Soon, however, Hamouma equalized, and the Bears created almost no real dangerous chances. Ajaccio had eight goal attempts, hitting the shot four times.

Lens intends to fight for the European competitions every year, and the club had a good transfer campaign before the start of the season. The most intriguing signing was Lois Openda, who scored 19 goals in the last Eredivisie. In his debut game, however, Openda did not show much of himself, and the Blood and Gold defeated Brest 3-2 thanks to a hat-trick from Florian Sotoca. Initially, it seemed that Lens should have no problem bringing the game to victory with a 2-3 goal difference, but in the 2nd half, the team brought problems to themselves, conceding two goals.

In the game with Brest, Adam Buksa, Gael Kakuta, Steven Fortes. and Wuilker Farinez did not play due to injury. Nevertheless, Lens had an impressive pre-season even without the players above, beating Inter Milan 1-0 in one of the friendlies and playing a 0-0 draw with West Ham. What struck the eye most was the Blood and Gold's confident play in defense, and it was no coincidence that the team scored five goals in six friendlies, winning five times.

In the last ten head-to-head encounters, Lens has defeated Ajaccio 7 times, suffering two losses. The previous meeting took place in 2019, and then the Blood and Gold were stronger with a score of 2-1. Lens had players who still play for the club at the time, with Florian Sotoca scoring a double.

Lens impress with their attacking play, and they are clearly stronger than Ajaccio in terms of the selection of players. On the road, however, it will be doubly difficult for the Blood and Gold because the opponent likes to hide in the defense. And the Corsicans defended with great strength against Lyon. We have already talked about the progress of the guests in defense, and the hosts, in addition, were left without their main striker. Ajaccio scored only 39 goals in 38 games in the last Ligue 2 draw, and we should not expect sparkling soccer from them. I suggest betting on the following outcomes: