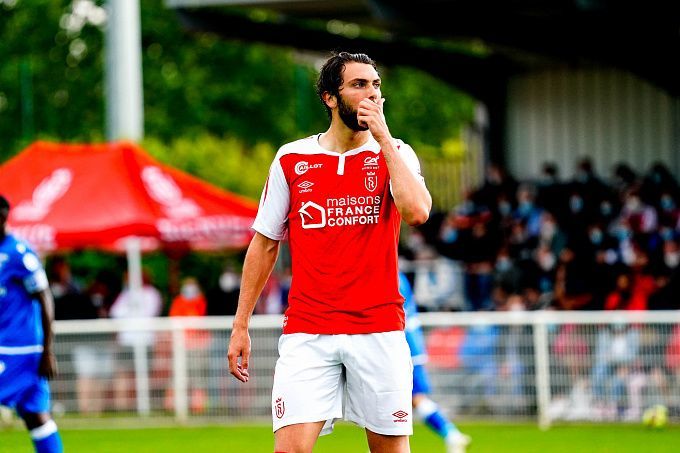 Reims will face Clermont at home in the second round of the French Ligue 1. Last season, the Red and Whites did not lose to this opponent. Will they be able to win again?

In the off-season, it was difficult for Reims to keep all of their leaders, and the main loss was the departure of Predrag Rajkovic and Hugo Ekitike. Nevertheless, the club has every chance of maintaining its former position in the French league. Folarin Balogun, an Arsenal pupil, replaced Ekitike, and the Englishman scored a goal in the first round. Junya Ito has proven excellent for Belgian Genk, although he has yet to make his Ligue 1 debut for Reims. Overall, the Red and Whites' attack has every chance to transform, with forward Kaj Sierhuis in the sickbay. Moreto Cassama's participation in the match against Clermont is still questionable.

In general, the off-season went well for Reims, although they could not beat Villarreal (0-1) and Sassuolo (2-2) after victories over Auxerre (2-0) and Metz (1-0). Oscar Garcia's players failed to defeat Marseille 1-4 in the opening round of Ligue 1. The Red and Whites had a chance to avoid a defeat and, at the same time, revive the intrigue, but Yunis Abdelhamid failed to convert a one hundred percent chance at 0-2. Looking at the statistics, Reims looked decent: 16 goal attempts, six of them on target.

At the end of last season, Clermont easily retained its place in the top division, but it will be tough to consolidate in Ligue 1. The club's top scorer Mohamed Bayo left, defender Akim Zedadka also left for Lille, and midfielder Salis Abdul Samed now plays for Lens. The Lancers have signed quite a few players, but it's hard to see any prospects in them. Komnen Andric hasn't shone much at Dinamo Zagreb either, and he's already 27 years old. Just like Andric, Mateusz Wieteska, and Mory Diaw haven't played in the top leagues, Maxime Gonalons's career is slowly starting to fade. Clermont has Yadaly Diaby, Mehdi Zeffane, and Jason Berthomier in the sickbay, with the latter playing an essential role in the attack.

Nevertheless, four wins in six summer sparring sessions have inspired optimism, with Montpellier and Toulouse among the defeated. On Matchday 1, Clermont was beaten by PSG 5-0. Pascal Gastien's team could not oppose the Parisian giants: they totaled seven goal attempts and only once hit the target. Clermont could not break the defense and shot from afar almost all the time. These efforts did not represent any danger to the opponent.

Reims has beaten Clermont four times in the last six encounters, suffering only one defeat. In the previous meeting, the spectators did not see any goals scored, 0'0. Clermont looked better in the game, and even after the suspension, the Lancers created some excellent chances. Reims also had an opportunity to take the lead, but Alexis Flips missed a 100 percent chance.

Reims was a bit unlucky in the last match against Marseille, although, on the whole, they lost for a reason. However, it is encouraging that the Red and Whites did not sit back in defense, and even on the road, they created some chances. In comparison with last season, Clermont has not become any stronger. The transfer campaign could be regarded as a failure so far. H2H stats speak in favor of the hosts. Reims is quite capable of gaining 3 points. I suggest betting on the following outcomes: