Wolfsburg vs Bayern Prediction: the Wolves to Take Advantage of Bayern's Lack of Motivation 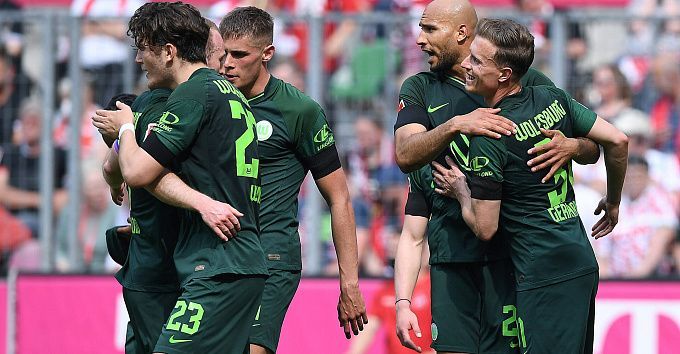 One of the matches of round 34 of the Bundesliga will be the match between Wolfsburg and Bayern Munich. Both teams are unmotivated. Still, the upcoming match is probably very important for the Wolves. Not only is it the last home game of the season, but also against the reigning German champion. So we expect many actions from the Green and Whites.

After a humiliating 1:6 defeat in Dortmund, Wolfsburg played three matches: Wolfsburg thrashed Mainz 5:0 at home, drew 1:1 away with Stuttgart and beat Koln 1:0. Excellent results at a very decent level of the playing. The only question is why Wolfsburg didn't play like that during the season. Currently, the Green and Whites occupy 13th position, with 41 points. The hosts are not threatened by relegation, and European Cups are not in sight. The Wolves will not drop in the standings and they can still climb, but no higher than the 10th position. Wolfsburg's home statistics are 12th in the division, +7=2-7, 23:19 goal difference.

We are looking forward to a match against a worthy opponent, especially for the season finale, because Bayern is the highest possible challenge in the Bundesliga. I think it will be very atmospheric with a full house at the Volkswagen Arena. We definitely want to play a very open game on Saturday and win if possible. I hope that at the end of the day we go home with a good feeling that next season will be more successful, and that we will say goodbye to our spectators with dignity.

Kohfeldt before the match with Bayern

After defeating Borussia, which was decisive in determining the German champion, Bayern lost to Mainz and drew 2:2 with Stuttgart. The upcoming match has no tournament significance for Munich. We doubt Nagelsmann will field the main lineup for this meeting. In the last three games with Bayern, the score was through a TO (3.5), so there is every reason for the upcoming encounter to be productive. On the road, the Reds have the best statistics in the division. Within sixteen games, they have 11 wins, two ties, and three defeats, 47:20 goal difference.

We expect a productive match, the same expect the bookmakers, and the total is at 4.5 - too high. That is why we choose the outcome, or rather the handicap. Given the results of Bayern after gaining the 10th shield, we will not be surprised if Munich fails in one more match. Moreover, the Wolves themselves look good at the end of the championship. They are ready to give battle to the champion, even trying to take revenge on Bayern for the devastating defeat in the first round.