Germany (w) vs France (w) Prediction: Germans have a better chance to succeed 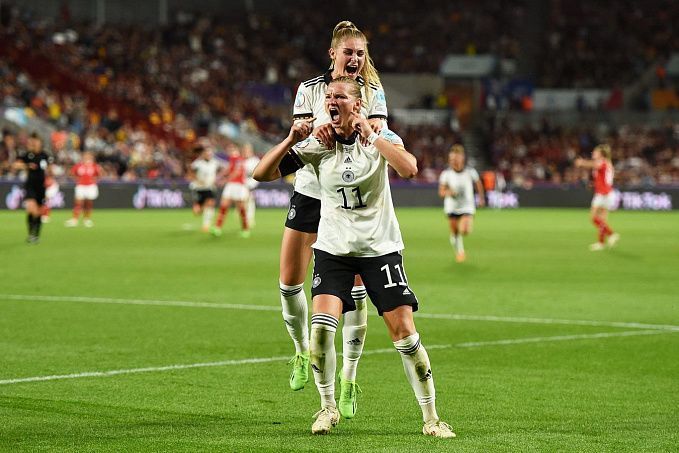 On July 27, 2022 Milton Keynes will host the semifinal match of the UEFA Women’s Euro, with Teams Germany and France locking horns at 22:00 (UTC+3).

The Germany women's national football team is the most decorated team in the European soccer. While Germans have become champions at the world stage only twice, in 2003 and 2007, then at the continental tournaments they have played in the finals ten times and won gold medals in eight cases. A phenomenal result! Nevertheless, their worst result in history was at the last Euro 2017, when they dropped out as early as in the quarterfinals, which indicates a kind of decline. Now the German team has already performed better: at the group stage, they managed to win all three matches with a total score of 9-0, and in the quarter-finals they defeated the Austrians 2-0, securing a medal.

The French team is probably at its peak. Never before have French women won medals in major international competitions. Their best achievement is fourth place in the 2011 Championship, but that local success was not followed by any breakthrough. Tricolor first qualified for the continental championships in 1997 and have since made the tournament's finals six times in a row, but have never before advanced from the group to the playoffs. And now, playing at Euro 2022, the French national team for the first time have reached the medals: they defeated Italy and Belgium in the group stage, 5-1 and 2-1, respectively, and also played a 1-1 draw with Iceland. In the quarter-finals, they hardly got past the Netherlands, winning 1-0.

Over history, the teams have played 14 head-to-head encounters. The Germans have won seven games, while the French were stronger in four, other three matches a draw. The last time the opponents faced off was in June 2021 when the French national team celebrated the victory in a friendly game, 1-0.

Teams Germany and France are used to playing dominant soccer, but in the upcoming match, someone will have to depart from their philosophy. It seems that the Germans are a bit more ready for this, who at Euro-2022 quietly played from the defense against the Spaniards, winning 2-0. The French looked less convincing at the tournament in defense, and in the quarterfinals, they spent on the field half an hour more due to extra time. The German side have a great experience of winning, being 8-times European champions and this is the first time France have qualified for the semifinals. As a result, we are forced to place our bet on the German national team's qualifying for the finals with the odds of 1.84.

The German national team looks flawless in defense at Euro-2022 so far. Four matches played, zero conceded goals, and they have allowed to create the minimum number of chances at their gate. But the French conceded in all three meetings in the group stage of the tournament. Though they kept a clean sheet in the quarter-finals, the Dutch had their moments in the attack. Much more skillful German team will take advantage of any mistakes of the French in defense, so at least one goal from them is clearly worth expecting, after which may come the second. Based on this, the optimal betting option seems to be Germany's Individual Total Over (1) at odds close to 1.85.

At Euro-2022, the French national team has to do without its top scorer Marie-Antoinette Katoto who got injured, but the German national team is doing quite well with its leader of the attack. Alexandra Popp is the most productive player on the German team at the tournament although she is not a forward. Currently the 31-year old has already scored four goals and she evenly distributes them among the matches of the championship. Sometimes she is even lucky, as it was in the quarterfinals when the goalkeeper of the Austrians gave her the goal. Obviously, she is able to continue to score, and you can bet on her goal for about 3.20.

Our prediction: Team Germany to qualify for the final at odds of 1.84 at 1xbet.