Independiente vs Santos: betting on a 1-1 draw 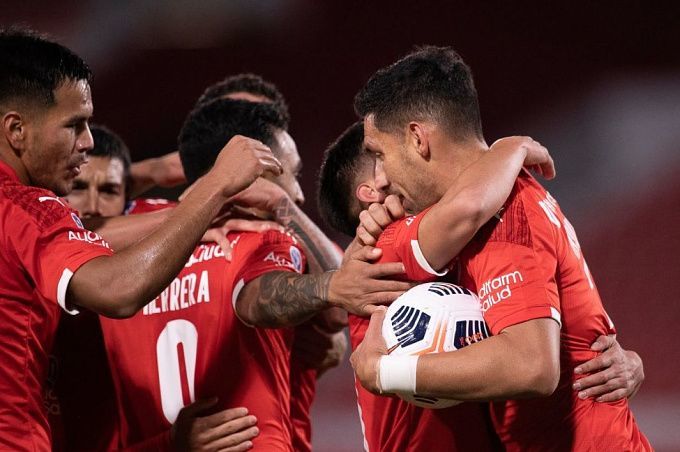 Independiente from Argentina and Santos from Brazil will meet in one of the main matches of the Copa Sudamericana 1/8 finals. In the first leg of their Copa Sudamericana  Santos took a narrow 1-0 advantage over Independiente. Now the bookmakers are on the side of the Argentinian team, but we should not forget that the championship of Argentina just started.

After their defeat against Santos, Independiente played one match, the first in the 2021/22 Argentina Championship. Independiente's opponent was Argentinos Juniors, the team that played against River Plate in the Libertadores Cup 1/8 finals and was eliminated by the Millionaires. Independiente had the initiative in the match against Juniors, at least in terms of the number of shots made, that's for sure. 12/8 in the direction of the goal and 6/1 on the goal. But it wasn't enough to score at least one goal and, win the game.

As we remember, Santos fell into the Copa Sudamericana after losing in the Libertadores Cup group to Ecuador's Barcelona and Argentina's Boca Juniors. By the way, the Argentinians had already dropped out of the tournament as well, while the Ecuadorians continued to fight for the trophy and will play against either Cerro Porteño or Fluminense in the ¼ finals. After defeating Independiente a week ago, Santos had an important match in the Brazilian championship. Their opponent was Bragantino, a team from a neighboring state in Brazil. This duel ended in a 2-2 draw, and Santos saved the match in the fifth added minute, thanks to a goal from Leonardo. However, it is worth noting that Santos has the worst away-match statistics in the division. The draw against Bragantino was only the second out of four defeats and this team has zero wins so far.

Santos has much more practice and experience, although we can say that right now the Brazilian teams have too much practice, given the tightness of the season. On the other hand, Santos is weak playing away, and we can't ignore that fact, either. We think that the match between the Argentinians and the Brazilians will be a draw again, for instance, with a result of 1-1. Here are betting options: Tie for 3.20, Exact score of 1-1 for 6.50, Total Over (2.5) for 2.30.