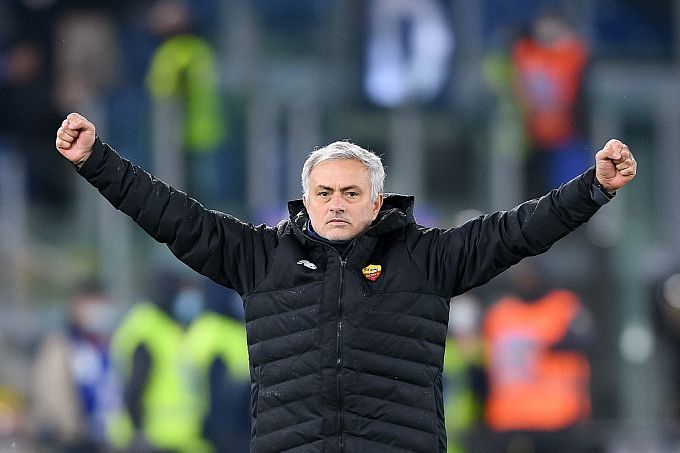 Roma played another unsuccessful match, losing with a minimal score to Bologna. The next opponent of José Mourinho’s team is Inter, which has already won 4 victories. Will the Yellow and Reds be able to cope with the Nerazzurri? Let’s choose several options for the bet at once.

After a terrible defeat from Venezia, José Mourinho slightly rebuilt the game. The team’s playing became more balanced, so the team got whitewashes over Torino 1:0 and 2:0 over Genoa. Roma should have scored at least one point in Bologna, but the Romans were again let down by the actualizing (the main problem of the capital’s team in the current season).

If Roma plans to play Mourinho football further, it needs a top forward. Tammy Abraham is promising, but so far, due to his youth, he is unreliable. According to xG, the English striker should have scored seven goals in this championship. The same goes for Eldor Shomurodov. According to insider information, the Uzbek forward scored one goal for Roma in Serie A and had chances of 2.41 goals. These performers will likely have less playing time at the end of the winter.

Inter is Catching up with the Leaders

The defining point for Simone Inzaghi’s team was the home game with Napoli on November 21. Inter beat the championship leader 3:2, joining the fight for first place. Next, the Big Grass Snake won two more victories in Serie A 2:0 over Spezia and Venezia. Regarding the results, Inter can overtake Milan and Napoli, who are located higher in the standings. The Black and Blues are 2 points behind the first position.

Six of the seven previous matches of the opponents ended up with a draw.

Inter has already won 4 victories. Worth noting that during this period, the Nerazzurri only once met with an equal opponent – Napoli. At the beginning of the game, the key player and the captain of Napoli, Lorenzo Insigne, had to leave the field due to injury. Also, Roma played their match with Napoli well this season – the Wolves destroyed the opponent's offensive plating at home and could have won, but Tammy Abraham did not convert the chance.

In conclusion, Roma is not as bad as it is commonly said. The Yellow and Reds have a chance to win the upcoming game. An additional factor will be the forthcoming European Cups - Inter will play with Real Madrid in the Champions League next week. Roma will have a match with CSKA Sofia, so they get into the playoffs with ease. Prediction: the victory of Roma or draw.