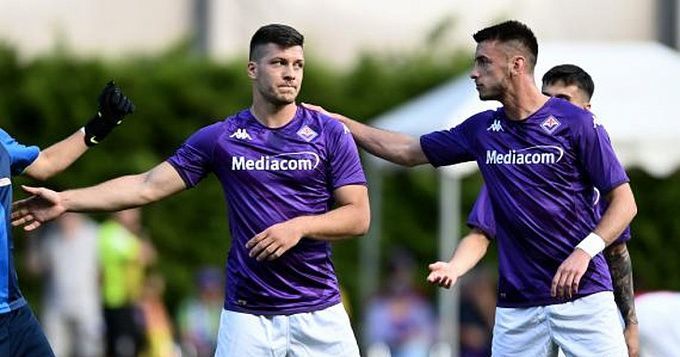 Fiorentina will open the new season with a home game against Cremonese, the elite league newcomer. Will the Violets be able to start with a victory? We will select a few bets.

With Dusan Vlahovic moving to Juventus, Fiorentina went downhill. Vincenzo Italiano's team started scoring poorly and finished the domestic championship in seventh place only. Fiorentina, of course, made it to the Conference League, which can be considered a success, but with Vlahovic in the squad, the Violets could have finished much better.

The team from Florence enters the new championship with a new Balkan forward, Luka Jovic, who never gained a foothold at Real Madrid. The forward lost the competition to Benzema, but even Gonzalo Higuaín lost it in his time. Before moving to Madrid, Jovic performed well in Germany for Eintracht, and it seems that he will be able to rehabilitate his name at Fiorentina. Today's Fiorentina are similar to Eintracht – also an attacking team. And the Italian championship in recent years has become even more open and productive than the German.

Cremonese out of elite for a while

The team from Cremona hasn't been in Serie A for a long time, since 1996. Over 25 years, Cremonese managed to play in Serie C and even in Serie C2. But they did not fall apart completely, as it sometimes happens, but quickly made it to Serie B. And last season, they took second place in the second division of Italian soccer to come back to the elite division.

Cremonese has already played the first official match of the new season. The team led by Massimiliano Alvini defeated Ternana 3-2 in the home game of the Coppa Italia round of 64.

With Luka Jovic, who will understandably be motivated to the utmost, Vincenzo Italiano can once again play attacking soccer effectively. In addition, we should not forget that Fiorentina also has a scoring forward from Basel, Arthur Cabral. The Violets will likely unleash their attacking potential in the first match of the season. Besides, the opponents are only Cremonese – the team which is probably the main contender for relegation.

Prediction: Fiorentina will be closer to winning the game. Cremonese will probably score, and they also have a new forward - Okereke from Venezia, but will not be able to contain the opponent's top offense.