Sassuolo vs Venezia: It’s time for the Neroverdi to pull themselves together and win 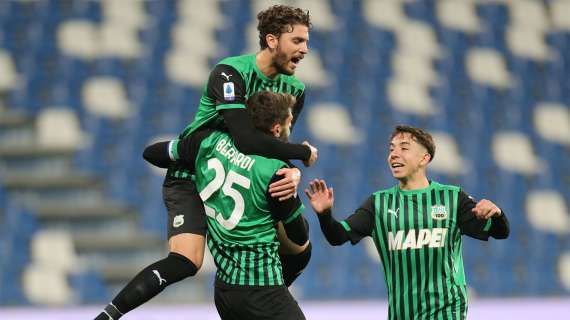 Sassuolo is again short of points after losing the match against Genoa in the last minutes. If the Neroverdi now fails to beat Venezia, will coach Dionisi be fired? There are several options to bet on.

Sassuolo is sinking further down the table

If things go on like this, the Neroverdi will unexpectedly become one of the main candidates for relegation from Serie A. After Sassuolo beat Verona in the first round, the team of Alessio Dionisi had only 1 victory and 4 defeats in the next 7 games. The last round saw the team miss another chance to improve the statistics in Genoa where they took a 2-0 lead against Genoa by the 20th minute. Still, the Griffins leveled the score at the very end of the match (2-2). Bad luck? Maybe so, but judging by the game Sassuolo does not deserve the place higher than the 14th, where the team is currently sitting.

Sassuolo is only 2 points away from the relegation zone. The fantastic team of Roberto De Zerbi literally fell apart before our eyes after the departure of the head coach.

Last season Paolo Zanetti's team surprised everyone in Serie B, winning a ticket to the elite championship through the playoffs, despite ending the regular championship only in 5th place. Now Venezia continues to amaze everyone in Serie A. The Venetians approach the match against Sassuolo with a phenomenal, considering their modest level and status, three-matches unbeaten streak: two 1-1 draws with Torino and Cagliari and 1-0 victory over Fiorentina in the previous round. Only 4 defeats in 8 rounds, marking a great start. It seems that the team will be able to score consistently from here on.

The teams faced each other in the mid-00s in Serie C, the third strongest Italian division. The four encounters saw Venezia win twice, Sassuolo victorious once, and the other game ended in a draw.

Venezia has proved that they are ready to fight with Serie A teams on equal terms. However, four games in a row without a loss is clearly too much for a modest team. Sassuolo will be in trouble if they can't beat the opponent. The Neroverdi just have to pull themselves together, support their young coach and win. When else if not in the upcoming game against an outsider?