Italy vs Argentina Prediction: Betting on an Exchange of Goals 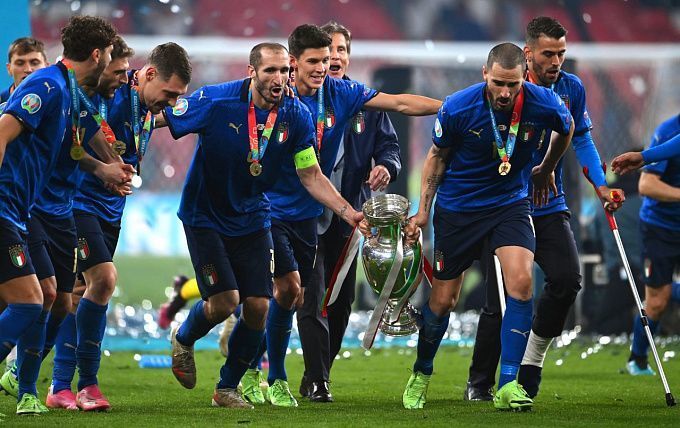 Europe's strongest team, Italy, will face South America's strongest team, Argentina, in the Finalissima. Despite the fact that the match will take place in the Old World, at London's Wembley, the bookmakers are paired on the side of the South Americans, believing that Messi and his squad will be closer to victory than Mancini's guys.

The last match of the Italian national team was held on March 29 against the Turks in a friendly match. That match ended with the victory of Italians with a score of 3:2, Raspadori scored a double, another goal was scored by Cristante. But before that happened the irreparable thing happened - the Italian national team in Palermo lost to the team of Northern Macedonia 0:1 with a huge advantage. That defeat cost the Scuadra a place at the World Cup. So, unfortunately, we will not see the Italians in Qatar. It should be noted that the Italian national team won the European Championship at Wembley. So this stadium is definitely no stranger to Mancini's guys. Well, we think the motivation after failing to qualify for World Cup will be on Italians' side. It is also worth noting that the upcoming match will be the last one in the national team shirt for Chiellini, the current team captain.

It was a difficult year, for Juventus and for me, but in the matches I managed, I played at my level. All this led me to leave now, to leave room for young people. Juve need to restart, and young people have to take responsibility and mature. I helped to clip some people's wings, now it's right for them to fly alone.

Giorgio Chiellini before the last match with the national team

Argentina has a crazy unbeaten streak. The last time the South Americans lost to the Brazilians (0:2) in the 2019 America's Cup was early July 2019. Since then, the Albiceleste have confidently made it to the final part of the 2022 World Cup and won America's Cup 2021, outscoring Brazil 1:0 in the final. Angel Di Maria scored the only goal in the game. By the way, Angel is very likely to appear on the field at Wembley from the first minutes of the match, and his career in the national team Di Maria decided to leave at the end of the World Cup. Argentina is doing okay in order. However, last time they played with the European national teams two and a half years ago in October 2019. Their opponents were the Germans, the match ended in a draw 2:2.

Italy did not deserve not to go to the World Cup, they are still European champions, a great team.

Bookmakers believe that the upcoming match will not be rich in goals. Their logic is obvious, the game is important, both want to win, and the cost of a mistake is high. However, these are attacking teams with an excellent lineup with a high individual skill level. It is difficult to say whether the team will reach TO (2.5), but it is very likely that the teams will exchange goals. We believe that the motivation is on the side of Italy, the drop-out of the World Cup hurts the ego of Mancini's wards, who now with double energy will try to win the Finalissima.