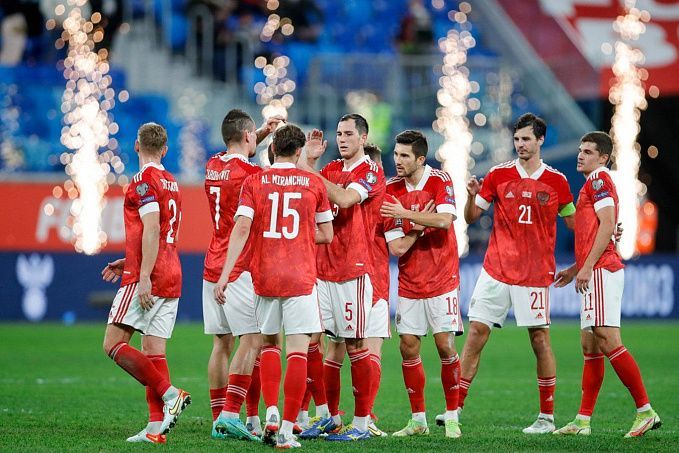 Prediction for the Kyrgyzstan vs Russia friendly fixture on September 24. Check the teams’ conditions and expert betting tips. Several betting options are available!

Kyrgyzstan has never participated in the world Cup. In the second stage, they dropped out of qualification for the 2022 World Cup. But recently, the team had great success, making it to the finals of the Asian Cup. They even managed to advance from the group but suffered a bitter extra-time defeat 2-3 against UAE in the first round of the playoffs. Now, the Red and Yellows continue qualifying for the next AFC Asian Cup, having played three friendlies. They lost to Bahrain 2:4, Uzbekistan 1:3, and Tajikistan 0:1.

Russia has often played in international tournaments for the last decade, achieving historical successes. But n the foreseeable future, the championships will do without them. Under Valery Karpin, the Russians had a tremendous spurt in their World Cup campaign. First, they played out in a nil-nil draw with the Croatians, then won five times in a row. But the final round of matches was failed to the same Croatia 0:1, ending up in the knockout stages. Of course, this is no longer relevant, but the national team will continue to play friendlies.

Kyrgyzstan is currently experiencing the best times as they recently qualified for the continental tournament finals for the first time. But the level of resistance there is much lower than what the Russian team is used to playing at. In their last three friendlies, the Falcons lost to Bahrain, Uzbekistan, and Tajikistan, against which Valery Karpin's squad is an absolute monster even in their current form. So they must take a comfortable win away from Bishkek.

The Kyrgyz team obviously is not a closed one. Alexander Krestinin's charges shy away from open soccer, scoring a lot, but they tend to concede even more. Their latest serious opponent was Japan, which won 5:1. It is unlikely that Valeriy Karpin's squad will sit in defense in their only match in a long time. On the contrary, the players must enjoy the game.

Valery Karpin is accustomed to trusting the players he knows well. One of those is Nikolai Komlichenko. He is under the watchful eye of the national team coach at Rostov, and it was under his watch that the forward began to open up, reaching the former level. The 27-year-old has already netted six goals in ten games this season, the top Russian scorer in the local Premier League. Moreover, he already has experience playing for the national team, including a goal against San Marino in the qualification for Euro 2020.