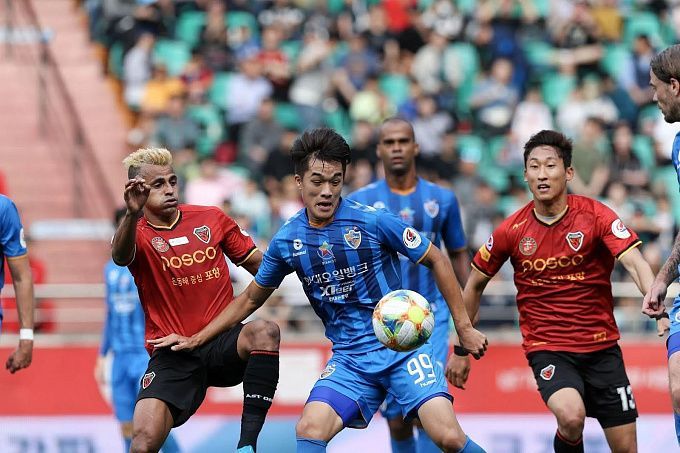 South Korea's championship leader Ulsan Hyundai will play on the road against Pohang Steelers. Will Ulsan score 3 points? Let's choose several options for betting at once.

Pohang in the middle of the table as usual

The Steelers approach the match against Ulsan 5th in the K League 1 standings. In general, this is roughly the result that Pohang has been claiming for many years. The club won the tournament in 2013, and in the previous championship, they finished third, and they rarely go above that.

Last round, Pohang failed to outplay modest Gimcheon Sangmu 1-1. Moreover, the opponents were even close to winning, but the 86th-minute goal was canceled due to an offside. The Steelers had another disappointing match in the middle of the week, losing to Daegu 2-3 in the Korean FA Cup.

Still, it happened in the previous round, when the tournament's leader failed to beat Seongnam at home (0-0). However, the team was rewarded in the middle of the week when they defeated Bucheon FC 1995 in the cup in a penalty shootout, 2-1 (1-1).

Overall, Ulsan now leads the K League 1 standings with a margin of eight points. An encouraging passing result for a team that has been pacing around for a few years now, but can't win a championship. Last season Ulsan finished second again, losing the championship to Jeonbuk Motors.

In the first face-off this season, Ulsan beat Pohang on the road 2-0.

Last season, Ulsan never lost to Pohang in the championship (two wins and a draw), but could not get through their opponent in the semi-final of the AFC Champions League, losing in the penalty shootout 1-2 (1-1).

Ulsan is not only the leader of the championship but also the best defense, albeit along with Jeonbuk. Hyundai has only 14 conceded goals in 18 games. The Steelers don't concede much either, with only 17 goals missed. So, most likely, the upcoming meeting will be low-scoring. But it is clear that it will be difficult for Pohang to count on more than a draw.

Prediction: Ulsan will be closer to winning a low-scoring match.