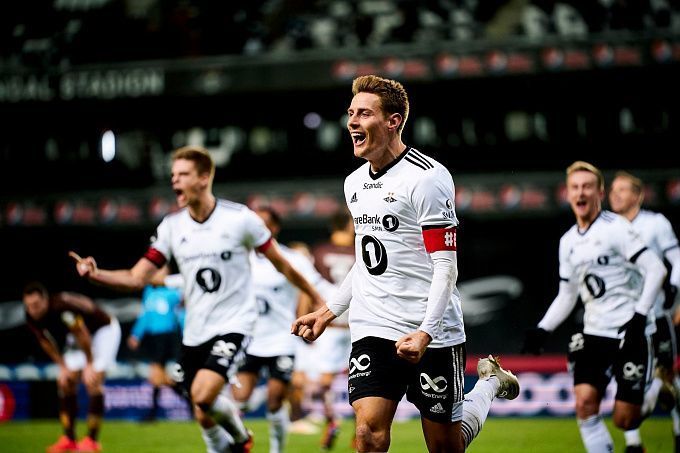 On June 25 at 19:00 (UTC+3), Trondheim will see another match in Eliteserien, with local Rosenborg hosting Kristiansund.

Rosenborg is the most decorated team in the history of Norwegian soccer, which is a 26-time winner of the elite division. The last time the Troll Children became champions was in 2018, after which their results went down, and now they are only middlings of the league. In the ten meetings they have played, the Black and White have scored only 14 of 30 points possible, and in the last four rounds, they won only once. Such modest results allows Kjetil Rekdal's squad to sit only eighth in the standings, although they have a couple of games in hand to slightly rectify the situation.

Norwegian top flight last season, finishing sixth in the standings. Unfortunately, much has changed for the Blue and Whites since then. Christian Michelsen's players completely failed in the opening stretch of the current championship. In eight meetings they suffered seven defeats against one draw, so with one point, they take the last place in the standings. The gap from the saving 13th position is already ten points, which at their current pace will be extremely difficult to make up for.

Rosenborg have had a tough game against Kristiansund in recent years, winning only one of their five previous encounters. It should come as no surprise; after all, last season the opponents finished on the neighboring lines in the standings. If the team from Trondheim now dwells on the same positions, the Blue and Whites significantly slowed down to become a hopeless outsider in the championship who sits last in the standings. As a result, we're forced to bet on Rosenborg's victory with a handicap (-1.5) at odds of about 2.10.

We shouldn't expect a goal extravaganza from this upcoming encounter. Now both teams are far from their best form, so it is unlikely they will play bright and attacking soccer, and the statistics speak against high scoring. In the four home games, Rosenborg had only ten goals were scored (2.50 on average per game) and four away games Kristiansund had saw only seven goals scored (1.75 on average per game). On this basis, the best option seems to be Total Under 2.5 goals at odds close to 2.40.

We are also unlikely to see an exchange of goals in the upcoming match. Rosenborg plays very well on defense in home games as proved by three conceded goals (0.75 on the average per game). On the other hand, Kristiansund are terrible at scoring on the road, where they've only managed one goal (0.25 average per game) in four meetings. In the confrontation of such a quality defense and weak offense, it is worth looking at the bet "Both teams to score - No" at odds of 2.025.