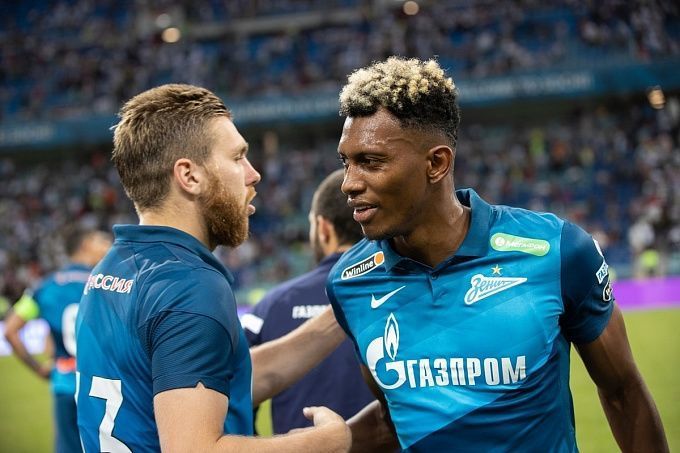 On September 29, the field of Otkritie Arena will host a match of the third round within the Russian Cup, in which Spartak will face Zenit. The game is scheduled to start at 20:30.

Spartak is having an ambiguous season. It seemed that Guillermo Abascal would be the club's savior that leads them to the championship, as his charges earned 13 points in the five rounds. But that didn't last long, since the opponents' level rose considerably higher and they lost to Dinamo (0:1), Zenit (1:2) and Rostov (2:4). Fortunately, there were two games with Fakel, which slightly improved the situation. In the Russian Cup Spartak won - 3:0, and in the championship - 4:1. In addition, in their last game, the Red and Whites defeated Lokomotiv, 1:0, moving up to fifth place in the standings.

Zenit has had so few lapses in the Premier League that they can already accept congratulations on the fifth title. Currently, the Blue and Whites are four points ahead of their nearest pursuer, with eight wins and two draws in ten rounds. Sergei Semak's wards are mercilessly cruel with every rival, so it's obvious that the club won't let anyone near them. Meanwhile, in the Russian Cup they started with a victory over Fakel - 3:0. Then they suffered an unexpected defeat by Krylia Sovetov - 0:2, which only increased the intrigue in the fight for the top two places.

Spartak and Zenit have already met twice in the past two months. First, in the Super Cup of Russia, where the Blue and Whites won 4:0. The Premier League match took place three weeks earlier, when St. Petersburg clinched a 2:1 victory. It would seem that such a close win gave the Moscow side a chance for points, but on the game Sergei Semak's charges were more likely to bring the matter to defeat. Now the visitors are the favorites, even if they decide to rotate the squad.

More recently, Spartak vs Zenit has a serious decline in performance, but in the last couple of years the situation has stabilized. Now we are once again seeing spectacular face-offs between these top clubs. In their previous seven encounters, the opponents scored 26 goals against each other (3.71 on average), which is much more than usually.

Mateo Cassierra, after his transfer to Zenit, was among the contenders to win the scoring race in the Premier League. Last season for Sochi he sent 14 goals in 22 games, becoming the second most productive player. In St. Petersburg he also got more classy and skillful partners in offense. Surprisingly, the Colombian forward still has round zero in the scoring column though in the Cup he shot already twice. And now he will have a chance to prove himself.