Alaves vs Valencia: the Opponents to Score and Draw 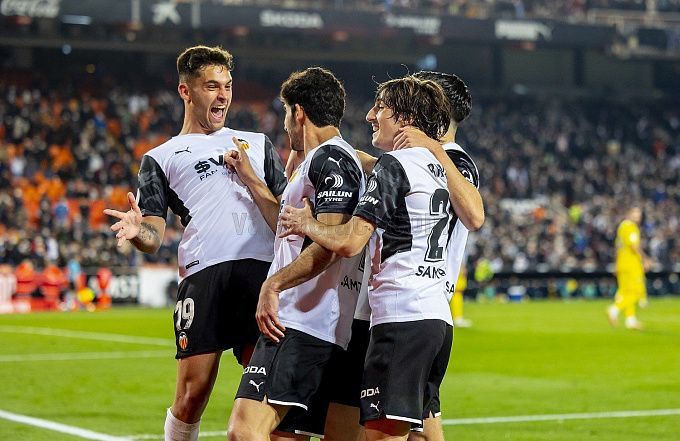 Sunday's pool of the Spanish La Liga will start with the match between Alaves and Valencia. Bookmakers did not reveal a clear favorite, all-knowing people believe that the opponents have approximately equal chances of success in the upcoming game. Check the teams’ conditions and expert betting tips. Several betting options are available!

Alaves are in the relegation zone in 19th place, six points behind Mallorca. In the past five games in the Primera Liga, the Basques have scored only two points. The club lost their last three games against Betis, Barcelona, and Elche. At the same time, Alaves can be called a home team. 12 points out of 17, which is 70.5% of the total, were earned in their home matches. But overall, Alaves' home stats are only the 18th in the division.

In contrast, Valencia played two matches in the Spanish Cup in early February: they knocked Cadiz out of the tournament and drew 1:1 in the first semi-final against Athletic. Valencia scored only two points in the three rounds in the Spanish championship, falling to Atletico Madrid and playing a draw with Sevilla and Real Sociedad. On the one hand, the statistics are not very good. On the other, we should mention the Levanteans' hot schedule in this period. By the 24th round, Valencia came in 11th position, 5 points behind Villarreal, located in the Conference League zone. Obviously, Valencia's priority tournament is the Spanish Cup. But the Orange are unlikely to let things slide in La Liga. Valencia's away statistics are 10th in the division, three wins in 11 games and five losses.

In the first round, Valencia confidently beat Alaves 3:0. However, the Levantines have not won in the Basque Country since 2017. The away stats for the Orange are not top-notch, so it's risky to bet on a win for the visiting team. Our teams play pretty effectively. For example, the last six games have been a TO (1.5). Also, note that the Basques and the Levantines often draw on the Alaves arena.