Osasuna vs Sevilla: the Southerners to come close to Real Madrid 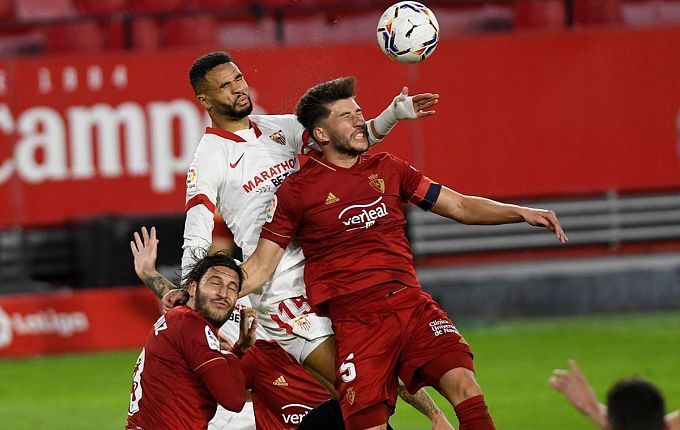 Round 23 of La Liga will see Spain's No.2 visiting the division middling, Osasuna, who still have ambitions to break into the European competitions. Let us point out that, despite the principled nature of the Pamplona side, Osasuna is a very comfortable opponent for the southerners.

It is apparent that Osasuna has a very difficult calendar ahead of them. After Sevilla, the Pamplona players are to play in Madrid against Rayo, then they'll host Atlético, go to to San Sebastian, take on Villarreal at home and then have a match at Camp Nou. The gap from the relegation zone is 10 points and it is unlikely that Cádiz and Alavés have a chance to catch up with Osasuna. However, during this period the position of the Pamplona side can definitely worsen, as well as the morale of the future hosts. It is an obvious disadvantage for Osasuna that the team has one of the worst home statistics in the division: only two wins in 11 games while four defeats from four teams in the first half of the table. This fact clearly increases Sevilla's chances of picking up three points in the upcoming game.

Before round 23 starts, Sevilla sits 2nd in the La Liga standings, 4 points behind Real Madrid. The capital team is strong, however, it is unlikely that the Nervionenses have given up on the title. We all know how much the South loves the Europa League, but now the desire to win La Liga is great and the chances are very real. To achieve that, they need to beat teams like Osasuna easily, especially after being knocked out from the Copa del Rey at the hands of Betis and two consecutive draws with Valencia and Celta in the Primera. On the road, Sevilla's stats are much better than Osasuna's home numbers, third in the division after Real Madrid and Betis.

We believe Sevilla to be the favorite. First of all, the southerners have won their last four matches against Osasuna, which means the Pamplona side is a comfortable opponent for the Nervionenses. Secondly, Osasuna had problems with results in home games throughout the first round of La Liga 2021/22, while Sevilla have the third best away statistics in the division. Thirdly, in order to be in contention for the title with Real Madrid, Sevilla need to consistently beat the middlings regardless of the field factor. Here are the betting options for the upcoming match: W2 for 2.252; W2+TU (2.5) for 3.90; Correct Score 0-2 for 9.00.