Real Madrid vs Getafe: We're not Waiting Neither Goals Nor Actions 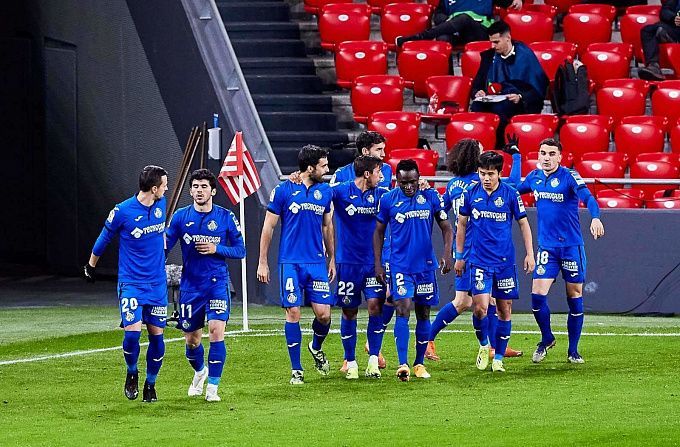 Saturday's pool of matches of the La Liga round 31 will end with a match between Real Madrid and Getafe. The small capital derby, where the Merengues, despite their busy schedule, are quoted as the favorites.

Last cycle of matches Real Madrid ended with a humiliating 0:4 defeat from Barcelona. But the new one began with an away win over Celta 2:1 and a confident 3:1 win over Chelsea London. After the victory over the Blues, there is little doubt that they will qualify for the Champions League semifinals. However, no one will guarantee Madrid anything so they will be extremely motivated for the match against Chelsea, and the strongest squad will certainly take to the field.

Currently, Real Madrid tops the standings with a 12-point lead over Sevilla. However, the southerners have one game in hand. There are only eight rounds left in the tournament so Real Madrid do not need a victory over Getafe. Even though no one among the Whites would give their rivals at least a chance. The home Real statistics in La Liga 2021/22 is perfect, after 15 games they have 34 points due to 10 wins, four draws and goal difference of 32:13.

Getafe has a three-match undefeated streak so they occupy 14th place. The gap between Getafe and Mallorca, located in the relegation zone, is six points, which is an excellent handicap for teams from the standings bottom. In the next three or four rounds they would not have to worry about their fate. On the last matchday Getafe defeated Mallorca 1:0. Before that they drew with Valencia and Athletic. Also, the four most recent games involving the Blues ended exclusively with ТU (2.5), while Getafe conceded three goals in this period. On the road, Getafe's stats are weak and lopsided, with no wins, seven draws and eight losses in 15 games, and a goal difference of 8:20.

Real Madrid has often beaten Getafe at home in head-to-head encounters. But, given the circumstances, we doubt that Saturday's meeting will be productive. First of all, due to the fact that the game against Getafe set just between the pair of matches against Chelsea in the Champions League. Real Madrid is not concerned with the matchup, especially since Ancelotti's team are in full swing in La Liga. Secondly, Getafe are in good form. They have not lost three matches and would not mind continuing the streak. The strong side of Getafe is not the offense, but the defense. Therefore, the visiting team at the Santiago Bernabeu can achieve a positive result only if they play good defense.

As we wrote above, Real is not really interested in La Liga since there is a chance to get to the semifinals of the UCL. It's a situation that must be taken advantage of by a solid Getafe. We doubt that they are capable of beating the league leader in Madrid, but the Blues should have enough potential for a draw.

It is unlikely that Real Madrid will leave the field without a goal, after all, the leader of the championship will play on home field. So, in order to count on a point, Getafe will have to score at the Santiago Bernabeu.