Valencia vs Levante: Will the Frogs Surprise Again? 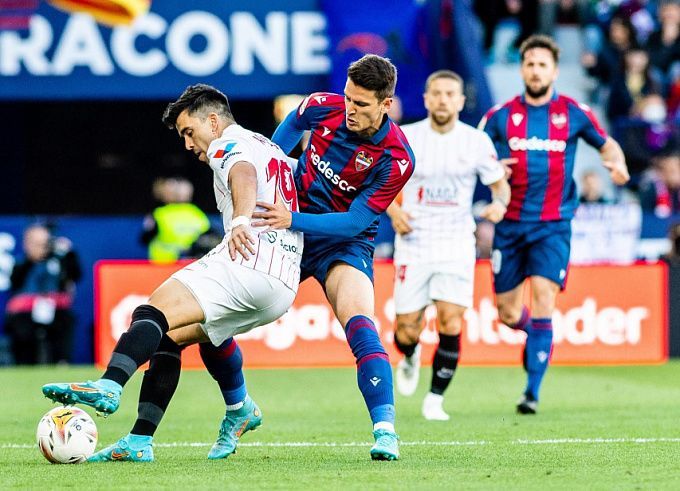 Within round 34 of the Spanish championship we will see the Levante derby, Valencia will meet with Levante. Despite the rather high motivation of the visiting team, the bookmakers are on the side of Valencia, who can still formally compete for a place in the European Cup zone. Although it is very difficult to believe in such a scenario.

We warned the coaching staff of Valencia. They can't treat La Liga matches on the eve of the Spanish Cup final like this if they really wanted to win the tournament. Before the match against Betis, Valencia did not win for four games. The Bats drew twice with Cadiz and Rayo Vallecano, and lost to Osasuna and Villarreal. The disappointing result was the derby loss to Villarreal. The Bats looked just like mice, got quiet and silently failed, conceding twice. Frankly, it is hard to believe that after a month and a half without victories and tournament motivation, Valencia will beat the encouraged Frogs. Valencia occupies 10th position with 42 points, i.e. the hosts are not facing relegation. The Eurocup zone is 10 points away and we doubt that they will enter it within 5 rounds.

Despite two defeats in the last four games, we like the current Levante. In April the Frogs scored 10 goals in 4 games, defeated Villarreal and Granada, gave a real fight to Barcelona and Sevilla, shooting two goals per meeting. In fact, it seems that Sevilla and Barcelona will represent Spain in the UCL next season. If Levante battled those deasoned clubs and defeated Villa, why should the Frogs lose to such an unmotivated Valencia? At the same time, Levante itself is completely encouraged, they are six points behind 17th Cadiz. Chances to retain their place in the elite are few, but they do exist, all they need to do is win. On the road Levante has the 17th statistic in the division, two victories in 16 games and 9 points.

The statistics of head-to-head encounters between Valencia and Levante are on the side of the Bats. However, we believe that Levante is not underestimated, but definitely not overestimated. Valencia has already forgotten when was their last victory. The hosts were preparing to the Spanish Cup final, but even in the decisive match they could not show their best qualities, losing in the tournament. After a series of failures and without motivation it will be extremely difficult to come up prepared for the upcoming match in the right form.

Moreover, we will not be surprised if Levante beats Valencia for the first time. Not so long ago, the Frogs outplayed Villarreal, Granada, Barça and Sevilla, so it is unlikely that the visitors are afraid of Valencia. Levante need points by hook or by crook, they must keep their place in the elite.

Match of the first round of La Liga between Valencia and Levante ended with a result victory of the Bats 4:3. We hope that the Frogs will take a worthy revenge, beating Valencia 2:3.