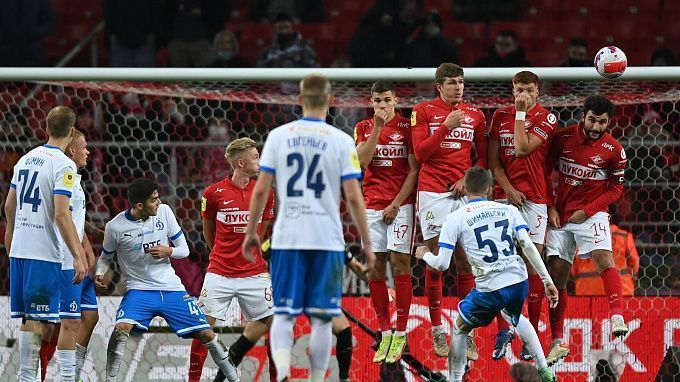 Prediction for the Russian Cup finals Spartak Moscow vs Dynamo Moscow match, which will take place on May 29. Who will turn out to be stronger? Check the team conditions! Several betting options are available.

Spartak has not proven themselves in all its glory this season, although there have been a couple of exciting moments. Under the Portuguese coach Rui Vitória, Spartak qualified for the Europa League playoffs from first place in Group C, earning ten points. The Moscow team could have fought for the awards with that kind of play, but the team dropped out of that tournament.

After the winter break, Spartak's coaching staff changed again. Paolo Vanoli's debut match in the Russian Premier League didn't go well - the loss in the Moscow derby to CSKA (0:2). However, the Italian still made a positive contribution to the team. The Gladiators claimed six wins, two draws, and only two losses in the previous ten games. The Red and Whites finished the season in RPL in ninth place with 41 points.

Spartak reached the final of the Russian Cup without much trouble. In the last 16, the squad thrashed Kuban easily by a score of 6:1, then defeated CSKA (1:0) in the quarterfinals. Finally, the Gladiators got a devastating 3:0 victory over Yenisey Krasnoyarsk.

Dinamo looked great last season in the RPL, but at the end of the season the team relaxed. Perhaps, the reason is that UEFA suspended Russian clubs from European competitions, and now the leaders have no proper motivation. After defeating Akhmat, the White and Blues suffered three defeats - to CSKA (0:1), Ural (2:3) and Krylia Sovetov (2:5). It's also worth noting that the Moscow side has the second-highest scoring total in the Russian league. They have scored 52 goals in 30 games, an average of 1.73. Only Zenit have more (2.2).

Dynamo's path to the Russian Cup finals was not the most difficult. First, the White and Blues defeated Nizhny Novgorod by three goals. Then, in the quarterfinals, they defeated Baltika 2:1 and in the semifinals passed Alania with no problems, scoring three unanswered goals. In the upcoming final Sandro Schwarz's wards expect only for the trophy, because the last time Dynamo won the Cup of Russia back in 1995.

It's hard to decide on a favorite in this matchup, but we like Dynamo a little more. The fact is that Spartak had a controversial season, while the White and Blues have been more or less stable. There is one thing, however - Dynamo did not beat Spartak once last season in the RPL (2:2 draw and 0:2 loss).

Frankly, we don't expect to see many goals. We're talking about a title that Dynamo can't win for 27 years and Spartak for 19. On that basis, the opponents will play defensively to minimize the risk of conceding.