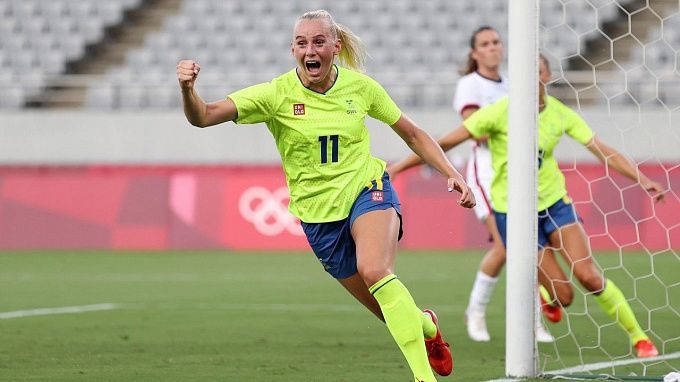 National women's soccer teams of Sweden and Canada will meet in the final match of the Olympic women's soccer tournament. The Scandinavians are bookmakers' favorites. Will they manage to confirm this status? We will choose several betting options for this crucial Olympic match.

Sweden Is Very Hard to Stop

The Swedish team demonstrates a high-quality, balanced game. It started with the 3-0 defeat of the US national team and continued to win in each match. During normal time! 4-2 against Australia and 2-0 against New Zealand in the group stage; 3-1 against Japan in the quarterfinals; 1-0 against Australia in the semifinals. Such a victorious stride! It would be terribly unjust if Peter Gerhardsson's team doesn't capture gold.

Canada Does What It Can

And the only thing it can do is destroy the opponent's game. It cannot be denied that the Canadians were very lucky. With only one win in the group stage (2-1 against the weak Chile team), the Canadians played 1-1 against Japan and Great Britain, left the group in second place, and played against Brazil in the quarterfinals. And... they drew again. 0-0 – the Brazilians failed to convert the goals and lost in the penalty shoot-out.

The penalty also decided the semifinal match between Canada and the United States. Beverly Priestman's team converted its only goal at the end of the match. Jessie Fleming was accurate from the penalty spot. Antifootball has brought success to the Canadian team so far.

Russian soccer is in a deep crisis which, unfortunately, has no end in sight. The appointment of Russian player Anastasia Pustovoitova to the Olympics final becomes even more valuable. One of her assistants will be another Russian – Ekaterina Kurochkina.

Pustovoitova has the 2019 Women's Champions League to her credit. And she worked at 3 group stage matches of the 2020 Olympics, including Sweden vs. the USA.

Canada's national team has never chased the game. We wonder what the Canadians will do if they miss the first goal. Chances are that the Swedish will give them such an opportunity. So, the question is whether Canada has plan B that involves attacking football. If Sweden scores the goal first, it will definitely win.