Rangers vs Braga: the Scots capable of turning the tables 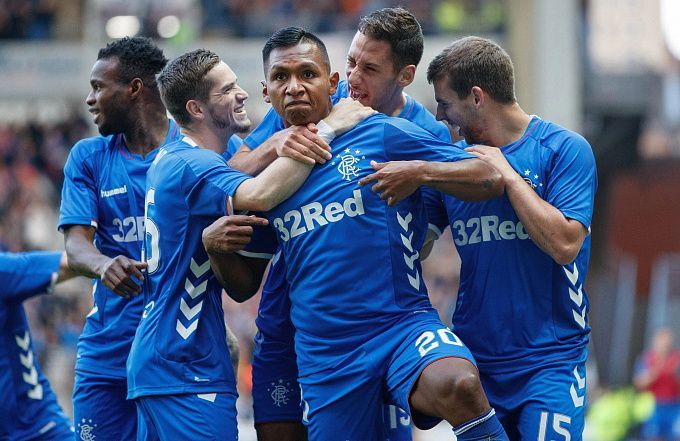 Braga beat Rangers in the first quarterfinal match of the Europa League, 1-0. Will Giovanni van Bronckhorst's players be able to take revenge in the return game? Our prediction: the Scots will be stronger this time!

Rangers are the reigning Scottish champion, who will very likely resign soon and lose the title to Celtic, as with five rounds before the end of the season they are six points behind their rival. The reason for that is two straight defeats to Celtic in their head-to-head encounters, 0-3 and 1-2, which turn out to be decisive in the championship race. But in the Europa League the Light Blues have already got to the quarterfinals, beating Borussia and Crvena Zvezda. In the first away game against Braga, they suffered a 0-1 defeat, though. Last weekend, Rangers beat St. Mirren 4-0 in the Scottish premiership, confirming their good form.

Braga is the team that lies between the three giants of Portuguese soccer and everyone else. This was the case last season, and so it is now. The lag from the top 3 is nine points for the Arsenalists, and they are nine points ahead of fifth place. Carlos Carvalhal's squad is now in great form, as they have managed to pick up four wins in their last four games in all competitions. While they already have no serious tournament motivation in the Portuguese championship, in the Europa League they continue to fight for the semifinals. In the playoffs, they have already managed to take on Sheriff and Monaco, and the first game against Rangers saw them win 1-0.

The teams have played a total of three face-offs. In the 2019/20 season, they played in the Europa League round of 32, when both times Rangers players were stronger, 3-2 and 1-0. Once again the rivals met a week earlier, when Braga players celebrated the 1-0 victory.

Rangers and Braga are two unexpected participants in the Europa League quarterfinals, and one of them is destined to reach at least the semifinals. The first game saw the Portuguese side closest to that with a narrow home victory, but the return leg will be held in Scotland, where a packed out Ibrox will be pushing their side forward. In the last round, Giovanni van Bronckhorst's side also lost narrowly on the road to Crvena Zvezda, but defeated the Serbs 3-0 at home. As a result, we'd have to bet on a Rangers win at odds of 1.97.

The first Europa League quarter-finals were low-scoring in all the fixtures; however, in three of the four games the opponents at least scored one goal, and the Rangers vs Braga encounter was completely limited to one goal. In the return game, there was not much chance for the opponents to play effectively. Braga is a very tough team which will play cautiously, while the Rangers obviously will not take any chances before the end of the game. On this basis, the best option seems to be Total Under (2.5) goals at odds close to 1.85.

Kemar Roofe is an experienced forward, who has managed to play in different countries and now he represents the Rangers for the second season. He has played in only 21 of 33 games during the current Scottish Premiership, but it has not prevented him from scoring ten goals and climbing to the top 8 snipers in the tournament. Moreover, last week the Jamaican player scored a hat trick against St. Mirren, which only confirms his excellent form, so you should take a closer look at his goal for about 2.30.