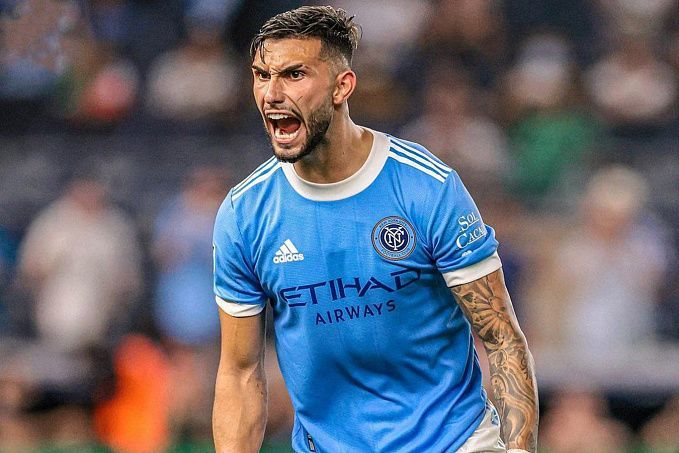 Another MLS match will take place on July 18 in the American city of Harrison where New York Red Bulls will take on New York City at 00:00 (UTC+3).

New York Red Bulls is one of the most experienced American teams, which was formed back in 1994. Despite such a long history, the Bulls have never in their history become the champions of the MLS, reaching the final series only once in 2008. However, three times they managed to win the regular championship, but the Cup battles all times failed, and last season they were eliminated in the first round. In the current tournament the Red-Whites are looking quite good, they have already scored 33 points in 20 meetings, which allows them to sit third in the Eastern Conference standings.

New York City is a much younger team, which was created only in 2013, but this has not stopped the Citizens from winning one major MLS trophy already. It happend last season. And now the Boys in Blue will try to defend the title, with their performance in the regular season only confirming the highest level of ambition. In 19 meetings, Nick Cushing's team has already won ten games, drew five times and suffered only four losses. Such strong results let the team sit on the second line in the Eastern Conference standings, and they are even in the lead in terms of points lost.

Within the MLS, the teams have played 19 face-offs. On the account of the Bulls, there are ten wins, City were stronger in six games, and another three games ended in a draw. Goal difference also favors the Red-Whites, 35-22. Last season, the rivals met three times: first, there was a draw (1-1), and then the players of the New York Red Bulls were stronger twice (1-0 each).

The New York Red Bulls and New York City are currently in the group of Eastern Conference leaders, which in itself indicates their solid level of play. Both teams lose very rarely, so even in a head-to-head encounter, you shouldn't expect anyone to be left without points. Yes, the Citizens look a little more stable and skilled, but the home advantage speaks for the Bulls, which levels the playing field. With that in mind, we might as well bet on a draw at odds of 3.60.

The New York Red Bulls and New York City have not been very productive lately. Last season, the rivals played three head-to-head encounters with only four goals scored (1.33 average per game), and the bookmaker's Total was never overcome during that stretch. Nevertheless, we have every right to expect a lot of goals in the upcoming battle, as the Citizens have been playing really fun this season, as evidenced by 59 goals in 19 games with their participation (3.11 average per game). On this basis, the optimal option for the prediction seems to be Total Over (2.5) goals at odds close to 1.80.

Valentin Castellanos is still a young player, but it is already the fifth season for him in this team. Last season he already had very solid personal statistics, scoring 22 goals in 35 games. And now he is going to beat the past record. Fifteen matches played, the Argentine scored 12 goals, which allows him to be the top scorer in the entire MLS at the moment. In this situation, it is worth looking at a bet on Valentin Castellanos' goal for about 2.60.