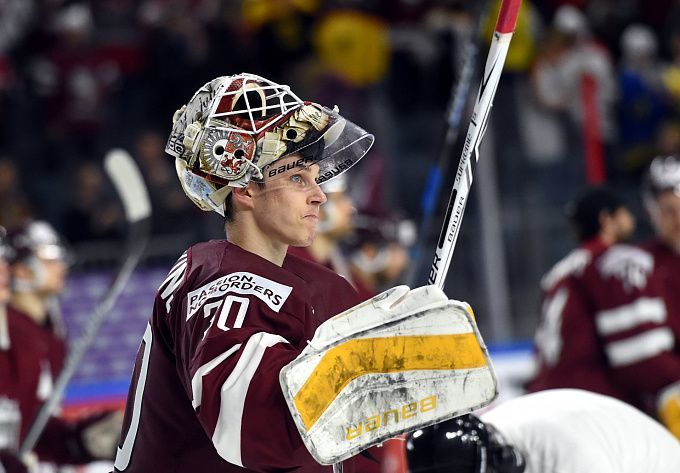 The Latvian national team could not get out of the group at the 2021 World Cup at home. Will Harijs Vitoliņš's wards prove themselves at the World Championships in Finland?

Latvia approached last year's home World Cup with high expectations. In the first game, Bob Hartley's charges sensationally defeated Canada 2:0 and their exploits ended there. Already in the second game they lost on a shootout to the Kazakhs. Then got a hard-fought victory over the Italians. In the next four games they did not win even once, so in the end they finished only fifth in the group, not entering the playoffs.

That was the end of Bob Hartley's tenure with the Latvian national team, with Harijs Vitolins taking over as their new head coach. Under him, the Latvians qualified for the Beijing Olympics, but failed in the final stretch of the tournament. The team had serious playing problems during the group stage so they didnt gain a single point in three games. In the last 16, they lost to Denmark 2:3 and buried their Olympics ambitions.

Despite the setback in the Chinese capital, Haris Vitolins continues to work. Latvia played six friendlies before the start of the Championships in Finland. To begin with, they have exchanged victories with the Frenchmen - 1:2 and 3:2, then twice lost to Switzerland - 2:5 and 1:3. In May Latvia twice outplayed the Kazakhs - 5:0 and 5:1. These victories are likely to give the Latvian team positive and self-assured emotions on the eve of the World Cup.

Latvia played somehow poorly at the Beijing Olympics. Especially their defense was questionable, when they conceded at least three goals in all four games. The Latvian opponents at the 2022 Olympics did not have any NHL players, while the Czechs, Finns, Swedes and Americans will surely bring in guys from North America for this World Cup. Though Harijs Vitolins brought in Elvis Merzļikins, he's used to a more organized Columbus defense, so he'll have a tough time with the national team. With that in mind, it's worth taking a closer look at a bet on the Latvian conceding total over 20.5.

Latvia will also have problems offensively where the main and only star will be Rudolfs Balcers, who played for San Jose last season and scored 23 points (11 goals + 12 assists) in 61 games. Thats all about it! Miks Indrašis, Kaspars Daugavins and Lauris Darzins are exhausted after Beijing so they wont join this time. It is difficult to predict who will lead the Latvians' offense in Finland. In this situation, a bet on a total under 16.5 makes sense.

Latvia is a modest team in terms of lineup so Harijs Vitolins must pay special attention to the power play unit. The coach himself is aware of that, as we saw at the Beijing Olympics, where his wards scored seven goals in four games, four of them on the power play (57%). In Finland, we should expect a high realization with a numerical advantage so we bet on the total over 5.5.