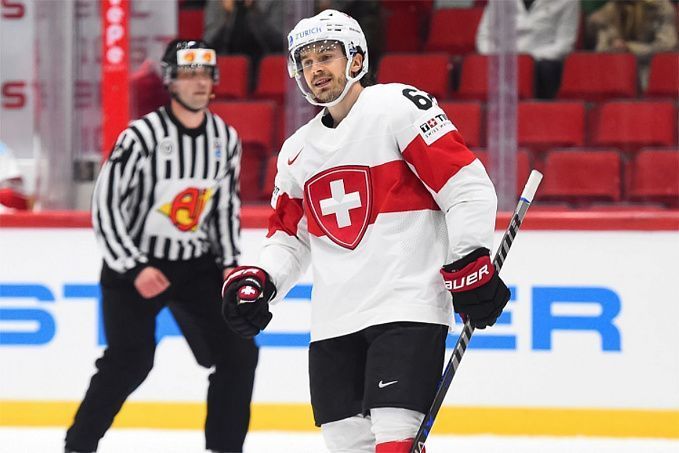 Prediction for the Hockey World Cup Switzerland vs France match, which will take place on May 22. Who will turn out to be stronger? Check the team conditions! Several betting options are available.

Everyone expects Switzerland to do some feats. In fact over the past decade they got to the finals of the world championships twice, losing both times. About the Olympics it is not necessary to speak at all. Now they are finally making a strong statement. Patrick Fischer's charges have beaten Italy, Denmark, Kazakhstan and Slovakia with the total score of 19:7. The main game in the group should have been against Canada, but even here the Swiss were stronger - 6:3, which allowed them to take the lead in the standings.

France is a team that should not have been in the world championships in the elite group at all if it were not for the happy circumstance of the disqualification of Russia. Philippe Bozon's team took the vacant place and performed good enough. In the five held meetings they have already managed to win over Kazakhstan and Italy with the same score - 2:1, only with Kazakhs they won in regulation time, and with Italians at the end of overtime. In the remaining three meetings, the team did not earn a single point, but hardly grieve much because of this, as a place in the elite division for next year they almost secured.

Switzerland and France are completely different teams. If the Nati are still tearing everyone in their way, including Canada, the Musketeers are fighting for points only with the outsiders of Group A. The highly motivated wards of Patrick Fischer are the unconditional favorites. As a result, we bet on a handicap 1 (-3.5).

Switzerland has not only beaten everyone in its path in Finland, but has also been good offensively every time. Patrick Fischer's charges have already scored 25 goals (5.00 average). France at World Cup do not concede that much but they still have the matches against the top teams ahead, so the statistics will surely worsen. The best option for the prediction is an individual total of Switzerland over 4.5.

Timo Meier is a star who never refuses to come to the national team for the world championships. He plays for the modest San Jose, which has been an NHL underdog for the last few years, but that hasn't stopped the 25-year-old from earning 76 points (35 goals + 41 assists) during the last regular season. He has been productive at the World Cup as well, with three goals and three assists in five games, so it's worth looking at the bet on Timo Meier's goal.