Anaheim Ducks vs Arizona Coyotes: Another win for the Ducks 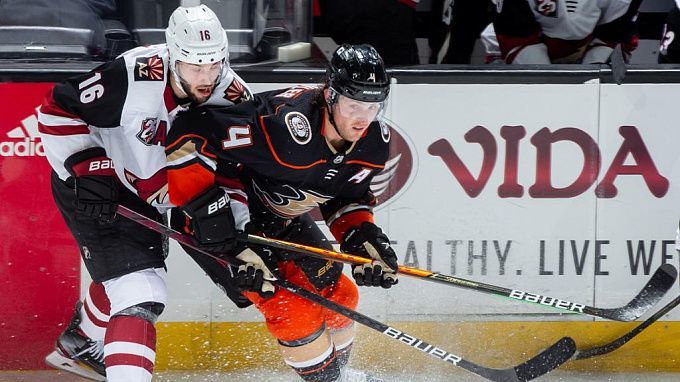 Anaheim claimed another win. Dallas Eakins' team strengthened their hold on first place in the Pacific Division. And in the entire Western Conference, the Ducks are second only to Minnesota. Will the Ducks be able to consolidate their success by beating Arizona on their own ice? Let's choose several options to bet on at once.

The Ducks are very confident going the distance of the championship. Dallas Eakins' team has avoided failure altogether. In their 31 games since the start of the championship, Anaheim has 17 wins and only nine losses in regulation time. In their last nine meetings, for example, the Ducks conceded only once within 60 minutes of the matchup with Pittsburgh, 0-1 on the road.

The previous match saw Anaheim confidently deal with Seattle at home. Zegras, Terry, Grant and Carrick were the goalscorers. Anthony Stolarz made 19 saves.

Arizona came close to upsetting the New York Rangers in their last game, but after leading 2-1 midway through the third period, Andre Tourigny's squad conceded twice before the final siren. 2-3, as Arizona strengthened their hold on last place in the Western Conference. The Coyotes are now 11 points behind the penultimate position still held by Seattle.

The opponents have already played each other this season when Anaheim beat Arizona at tome 3-1.

The favorite is obvious here. Arizona is the main provider of points this season. Unless something extraordinary happens, Anaheim will confidently outscore the Coyotes.


Tags:
Rating:
0
Comments (1)
Benard Momanyi
User
I like the prediction ,
0