Arizona Coyotes vs Philadelphia Flyers: the Flyers to seal the success achieved in Vegas 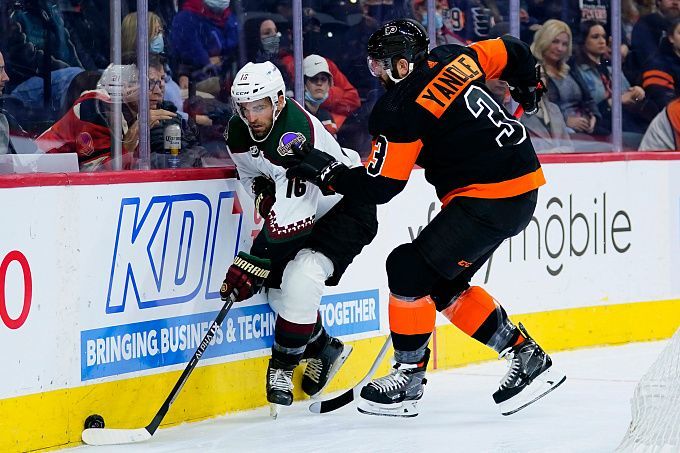 Philadelphia unexpectedly defeated Vegas on the road and now will continue on to Phoenix, where they will face the Arizona Coyotes. Will the Flyers be able to build on their success? Let's pick a few options to bet on.

Arizona on another losing streak

Arizona comes to the match against Philadelphia with a streak of 4 defeats in a row. The Coyotes have a 5-19 goal difference over that stretch. In general, nothing has changed since the start of the season. Andre Tourigny's team is still the main outsider of the NHL season. Arizona is essentially working with their sights set on the future.

Like Philadelphia, who finished less than 24 hours ago against Vegas, Arizona has a back-to-back. The Coyotes lost to Florida on their own ice, 1-3.

The Flyers picked up their first win under new head coach Mike Yeo. The Phils outlasted a powerful Vegas 4-3 on the road. Working the uneven lineups was a key factor. While the Flyers converted twice on the power play, Vegas only managed to score on their sixth attempt at the end of a 6-on-4 game. James Van Riemsdyk was the winning goal scorer. Maybe now Philadelphia will have a smooth game ahead?

The opponents have already met this season, Philadelphia beatin Arizona at home 3-0.

Philadelphia got an important victory from a psychological point of view. To beat Vegas on their own ice is not easy. The match against Arizona is a great opportunity to consolidate the success. It is likely that the revitalized Philadelpjoa will be able to do so.