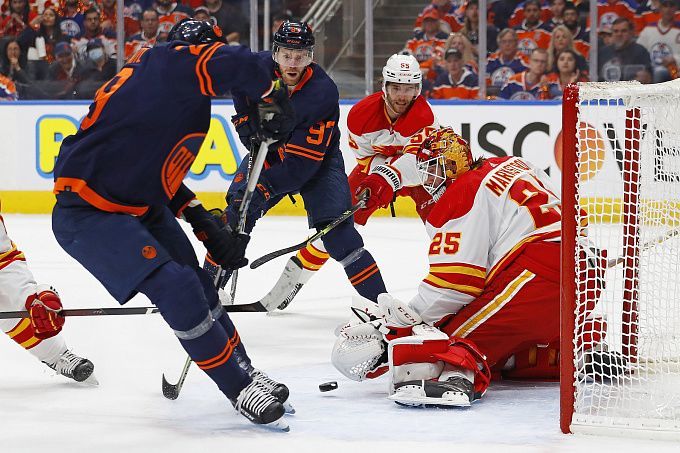 The Calgary Flames will take on the Edmonton Oilers in Game 5 of the Western Conference quarter-final in the Stanley Cup playoff series. The match is to take place on May 27, 04:30 (UTC+3). Let’s see how the opponents are doing & what the best bet is.

Calgary are not living up to expectations in this series. Overall, the Flames have been a shadow of themselves in the regular season as the playoffs have progressed. They got by Dallas somehow (4-3), and now they're on the brink of losing the series with Edmonton. In fact, Darryl Sutter's team started by winning (9-6), but then they lost three games in a row: 3-5, 1-4, and 3-5. Now the series score is 1=3, and Calgary will be saved only by three wins in a row.

Edmonton exceed expectations in some ways. While they got over Los Angeles only in game 7 (4-3), they have gained very high momentum here in the series with Calgary, showing gorgeous hockey. Jay Woodcroft's team, led by the super forwards, is one step away from the Western Finals – all they need to do is win one game. And since the series score is 3-1, Edmonton has as many as three tries!

Let's not take any chances and get into the outcomes in the upcoming matchup. While Calgary are down, they still have no right to lose the series in such an embarrassing way, on their own ice and in front of their fans. So the Flames will be incredibly fired up for the upcoming game. But Edmonton is on pace to end the series with this game.

Three of the four games in the series were very productive with at least eight goals. The opponents are highly unlikely to focus on defence this time as well. We expect spectacular, bright hockey between two excellent teams once again. Moreover, Calgary already has no way back.