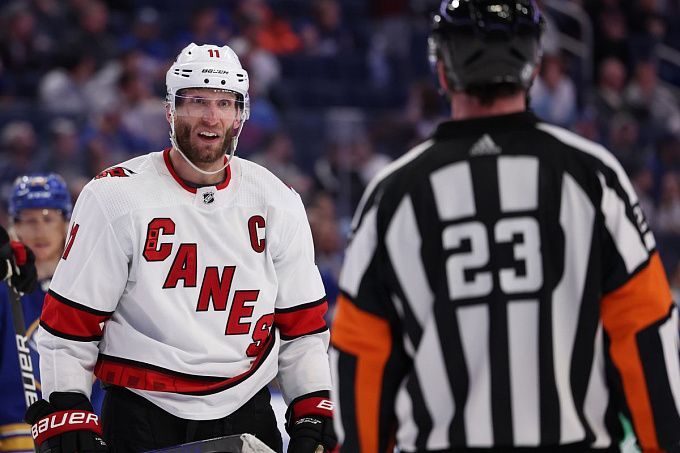 Prediction for the NHL Carolina Hurricanes vs Buffalo Sabres match, which will take place on April 8. Check the team conditions and choose several betting options.

Carolina failed to shine in their last two games. In the first, they lost to Minnesota by two goals, and then on the road they lost to Buffalo (2:4). Now the Hurricanes will play on home ice, where they have the second best record in the Eastern Conference with 25 wins in 35 games.

We can already say the Hurricanes have secured a playoff spot. In 70 games, the team has scored 98 points. The second-ranked Rangers are only two points behind, so Carolina cannot lose a second time against Buffalo.

Buffalo won't catch up with fourth-placed Boston in the Atlantic Division table. The Sabres are currently trailing by 30 points. They have no tournament motivation, so the team can quietly finish the season. In the last five games Buffalo got three wins over Chicago, Nashville and Carolina, and lost twice (to Winnipeg and Florida).

Buffalo has little chance of two points in the upcoming game. In the last game, they played with the support of the fans, but this time there won't be any. As a result, the visitors will no longer feel as confident. The Sabres are far from their best record on the road, with 22 defeats in 34 games in the current regular season.