Carolina Hurricanes vs Minnesota Wild: the Hurricanes are more likely to win 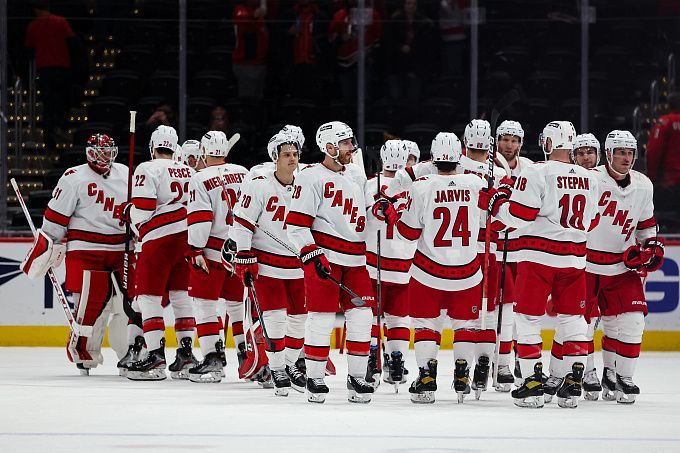 Raleigh will host another NHL regular season game on April 3, 02:00 (UTC+3), with local Carolina taking on Minnesota at the PNC Arena.

Carolina is having a very strong regular season. Rod Brind'Amour has been able to put together a solid gang over the years that is now ripe for the biggest challenges. The Hurricanes have shown decent regular-season championships, and they suffered a rare slump just recently when they allowed four straight losses in mid-March. Fortunately, they were able to pull themselves together quickly, so they haven't left the ice without points in their last six games, posting four wins with two setbacks outside of regulation time. All of that leaves the Red and Black sitting second in the Eastern Conference standings.

Minnesota is another team that has been able to make tremendous progress over the past couple of years. The Wild seemed to be the perennial NHL underdogs, but Kirill Kaprizov's arrival has changed things for the Minnesota Wild. The Red and Green have all but guaranteed a playoff berth, while posting very consistent, high-quality hockey. Dean Evason's squad had a particularly strong second half of March, riding a seven-game winning streak that was snapped the day before when they lost to Pittsburgh in overtime, 3-4. Nevertheless, Minnesota remains third in the Western Conference standings.

Carolina and Minnesota are among the leaders in their conference, so we can expect a bright and entertaining encounter. The home advantage speaks in favor of the Hurricanes, as the Wild have failed to win in four straight head-to-head encounters in Raleigh. Now Rod Brind'Amour's team is the favorite to win the game, so we have to bet on Carolina at about 2.00.

Carolina and Minnesota are two teams that have all but secured a playoff spot, so they can afford to rehearse in a head-to-head showdown. Of course, defense will come to the fore in this matchup, which has looked very decent on the season: The Wild have сonceded only 13 goals (1.63 average per game) in the last eight matches, while the Hurricanes allowed 161 pucks (2.37 average per game) over the entire regular season. Given that, Total Under (5.5) at odds of nearly 2.20 would seem to be a good bet.

Vincent Trocheck continues to remind us that he is a very high level forward capable of scoring consistently. While his last seasons at Florida were disappointing, moving to Carolina let him shine once again. Sixty eight games in the current regular season saw the 28-year-old American score 46 points (18 goals + 28 assists) which is not bad at all. That's why it is worth betting on his Total Over (0.5) at odds of about 1.70.