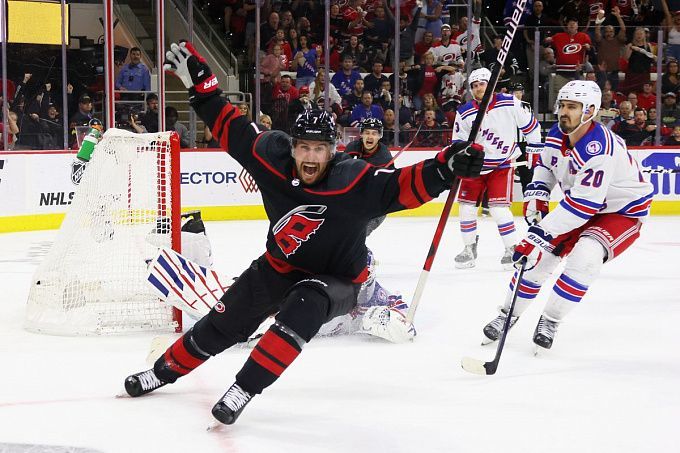 Prediction for the NHL Carolina Hurricanes vs New York Rangers match, which will take place on May 27. Check the team conditions and choose several betting options.

Carolina gets stronger, gaining cup experience and slowly getting closer to the trophy. Rod Brind'Amour has transformed the Hurricanes from NHL underdogs to a team that is consistently making the playoffs and battling for the top spots. The Red and Black have been winning exclusively home games during their current cup campaign, but that's enough to keep them in the game for now. In the clash with the Rangers, the team from Raleigh won 2:1 and 2:0 on home ice but then lost twice in New York, 1:3 and 1:4.

The Rangers can already consider this season a success, as they made the playoffs for the first time in five years, but they are not going to stop there. They beat Pittsburgh in seven games in the first round of the Stanley Cup, and now they've put up a good fight against Carolina. In the first two meetings, Gerard Galland's team lost on the road to the Hurricanes 1:2 and 0:2 but then won twice in the home stand, 3:1 and 4:1.

Carolina is a purely home team in the current Stanley Cup. The Hurricanes have won all six games on home ice while losing all five of their away matches. The upcoming match will be played in Raleigh. In New York, they were stronger both times. On the contrary, the Red and Black had the initiative in the game. As a result, we have to bet on a Carolina win at around 2.085.

Carolina and the Rangers were not overly productive offensively during the regular season while playing great defensively. Both teams suddenly lost their minds in the first round of the playoffs and had a strong, effective series, but now everything's back to normal. In their four meetings, the Hurricanes and Blueshirts have combined for only 13 goals (3.25 goals per game on average), so we suggest betting on a total under 4.5 for 2.85.

Jordan Staal is one of Carolina's most experienced players who were helpful during the regular season, recording 36 points (17 goals + 19 assists). The Canadian has registered one goal and four assists in 11 Cup games, but his tremendous experience should help the Hurricanes to succeed in the most decisive games of the season. So, we suggest betting on a Jordan Staal's total over 0.5 for 5.5.