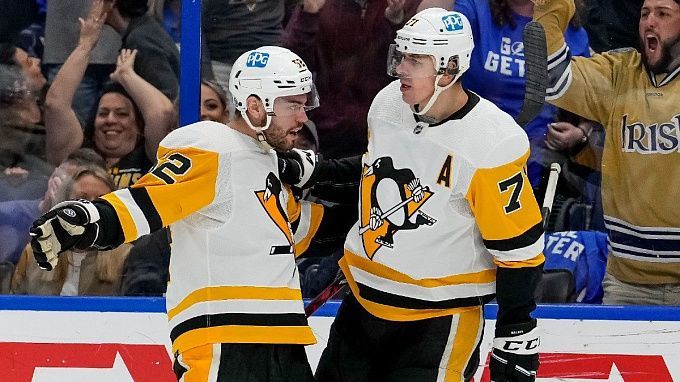 Pittsburgh had a great game against Tampa Bay, beating the reigning champion 5-1 on the road. Will the Penguins be able to consolidate their success with an away game against Carolina? Let's choose several options to bet on at once.

Carolina lost twice in a row

After a good streak, including an away win over Pittsburgh 4-3, the Hurricanes have suffered two straight losses. First, Rod Brind'Amour's team lost to Detroit 3-4 in overtime. Then they were beaten by Washington 0-4.

Carolina retained first place in the Eastern Conference standings despite two straight losses. The Hurricanes are proving top-notch over the course of the season, which is very relevant in the run-up to the playoffs.

Matches with Tampa Bay in recent years are a touchstone for the contenders, especially in the Eastern Conference. And Pittsburgh has passed that test. Sidney Crosby and the team confidently outplayed the Lightning on their ice, 5-1. Crosby recorded a goal and an assist. Evgeni Malkin also had a great game. The Russian scored a goal and made two assists. Pittsburgh has caught up with Tampa Bay in the standings. Mike Sullivan's team is fourth in the East and just three points behind conference leader Carolina.

Carolina beat Pittsburgh on the road 4-3 in the first game of the season series on February 20.

Having beaten Tampa Bay, the Penguins got a strong emotional charge, which should help them in the match against Carolina. Moreover, it is a matter of honour for Pittsburgh to beat the Hurricanes on their ice. Sullivan's team should take revenge on the Hurricanes.

Prediction: Pittsburgh will not lose in regular time at least; in addition, we should expect the game to be high-scoring because the backups DeSmith and Raanta are likely to take place in the goal.