Dallas vs Calgary: the Third Game of the Series Will Also Be a Tie As Well 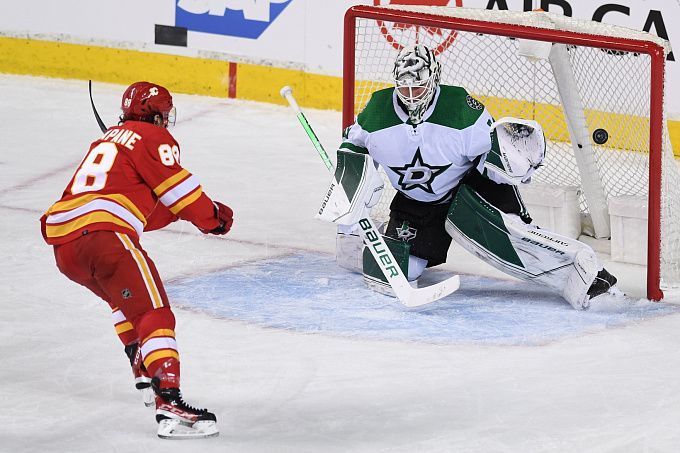 Prediction for the NHL Dallas Stars vs Calgary Flames match, which will take place on May 8. Check the team conditions! Several betting options are available.

Dallas got off to a poor start in the series with Calgary, as they lost the first game 0:1. However, the Stars had a great second meeting and managed to win with a score of 2:0. In the first half of the first period the veteran Joe Pavelski put his team ahead, and the second goal was scored by Michael Raffl.

Calgary defeated Dallas in the first game with a minimal score - in the sixth minute of the first period on the power play Elias Lindholm brought the victory to his team. In the second meeting the Flames failed to break through the Stars' goalkeeper Jake Oettinger but they conceded two pucks. Thus, the score in the series 1:1, and for Calgary it is obviously not enough. The team is quoted as a favorite, but could not get two wins on their ice.

In the third game of the series, we won't venture into the outcome. Calgary is the favorite, but as we saw in the second meeting, Dallas could easily fight back with the support of their fans in the home arena.

In two games, the opponents somehow managed to score three goals apiece. One of them was sent in an empty net. There are no prerequisites for the fact that in the third meeting they will open up and show crazy hockey. Therefore, we would suggest betting on an ordinary under. It is possible that everything will be decided again by one or two pucks.