Florida Panthers vs Tampa Bay Lightning: Lightning without Vasilevskiy and Panthers without Bobrovsky will have a goal feast 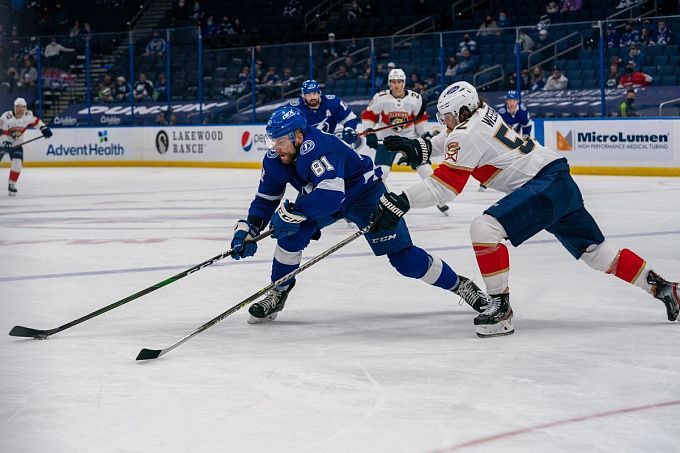 Tampa Bay didn't play their first game well after a forced covid break. The reigning champion nearly lost to Montreal but survived in overtime. The Lightning's next opponent is much more severe - Florida. Can John Cooper's team manage to cope with the Panthers? Check the team conditions and choose several betting options.

The game against Montreal proved the superiority of John Cooper's team once again. Without Andrei Vasilevskiy due to the covid protocol, the Lightning conceded four goals to the last team in the Eastern Conference but still managed to win. The game-winning goal was scored by Brendan Point, who had recovered from injury. Andrei Palat scored the winning goal in overtime.

Tampa Bay retained first place in the Atlantic Division and the entire Eastern Conference. The Lightning have 21 wins in their 31st game since the start of the championship.

Like Tampa Bay, Florida made a successful comeback after the break. They won the game, but only in regulation time. Andrew Brunette's team outplayed the New York Rangers in a challenging game at home. The Panthers were losing with a score of 1:2 at the beginning of the third period but managed to score three times. The Rangers responded with just one goal. Anthony Duclair scored the winning goal. The Panthers are 5th in the East and 3rd in the Atlantic Division, behind Tampa Bay and Toronto.

In the upcoming game, Tampa Bay will not be able to count on Vasilevskiy and his backup Elliott, who is also in the covid-protocol. On the contrary, Florida will have a back-to-back, with Sergei Bobrovsky defending the goal in the first part. That means Spencer Knight, who scored eight goals against Ottawa last time out, will take to the ice against Tampa Bay. The matchup is bound to be productive. Prediction: Total Over.