Content
To top
1.
Ottawa came back from the road without any points
2.
Vancouver managed to win after all
3.
Injuries
4.
Head-to-head encounters
5.
Expert Betting Tips
6.
Betting options
Users' Choice
87 200 USD

Ottawa vs Vancouver: the Canucks won not so long ago, it’s time for the Senators to shine 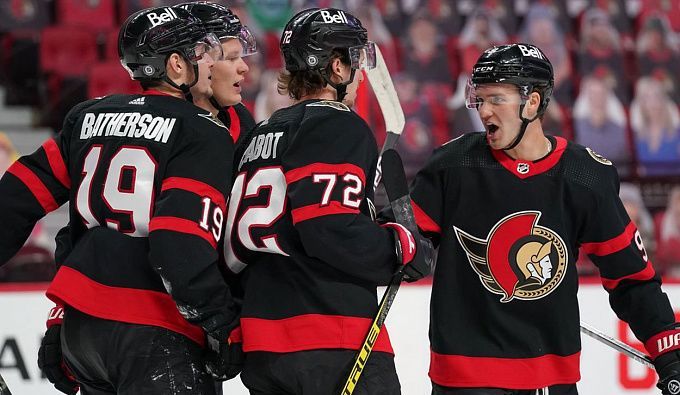 Vancouver got their long-awaited win, defeating Montreal 2-1 in the previous game. Will Travis Green's team be able to build on their success against Ottawa? We will choose several options to bet on at once.

Ottawa came back from the road without any points

The team from the Canadian capital spent the previous 4 games on the road. The result of the tour was 4 losses during regular time. The starting point of the trip had a huge influence on this result - in Denver, the Senators managed to cause a lot of trouble to one of the strongest teams of the NHL of the last seasons, the Colorado Avalanche. At the beginning of the third period, the Senators even took the lead and scored their 5th goal of the game. Still, the Avalanche managed to restore the balance by realizing the majority and won the game: Ottawa conceded the decisive goal a minute before the final siren. Then another empty-net goal came and the Senators lost 5-7. A very decent game for the young team, which, apparently, not only took all the strength out of it, but also broke them psychologically. In the next games, Ottawa failed to put their best: 3-6 against San Jose, 0-4 against Anaheim, and 2-4 against Los Angeles.

In total, the Senators have only four wins in 19 games since the start of the season. D.J. Smith's team is tied for the lowest point in the Eastern Conference standings.

Vancouver managed to win after all

While Ottawa just returned from the road trip, for Vancouver, the game in the capital will be the final stop on the tour. The Canucks played 4 games on the road, losing 3 of them during the regular time – to Pittsburgh, Columbus, and Boston. The only thing that helped the Canucks was crossing the border. Back in Canada, they outplayed Montreal. Elias Pettersson and Conor Garland scored for Vancouver, 2-1. And goalie Thatcher Demko made 33 saves.

The success in Montreal was only Travis Green's team's seventh in 23 games since the start of the championship. And so far, it should be said, nothing bodes well for an increase in winning frequency over the course of the championship. Vancouver's problems seem to run much deeper than simple inexperience.

If Vancouver got their long-awaited win, why shouldn't Ottawa do the same? The Senators have had quite a few bright games this season, scoring 5 not only against Colorado, but also against Washington, and Pittsburgh conceded 6 goals in Ottawa not too long ago. There is a feeling that the Senators didn't get the points they had to. The matchup against Vancouver is a great opportunity to add points to the table. The Canucks did not win in the main time in Ottawa in 60 minutes last season - they won’t do it this time either.

Prediction: Ottawa will be closer to victory.