Content
To top
1.
San Jose is not back in the game
2.
Vancouver has only had one bad period since the All-Star Game
3.
Injured reserve
4.
Head-to-head encounters
5.
Expert Betting Tips
6.
Betting options
Users' Choice
12 200 USD

San Jose vs Vancouver: the Canucks will be closer to winning, but the Sharks may not give up in regular time 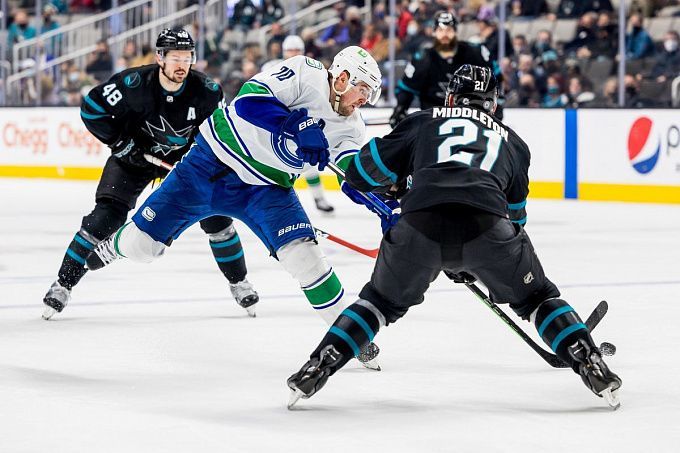 San Jose had a terrible game against Edmonton and lost by a score of 0-3. The Sharks will play the next match at home too, taking on another Canadian team, the Vancouver Canucks. Will San Jose manage to win this time? We will choose several options to bet on at once.

San Jose is not back in the game

The matchup against Edmonton was the first for the Sharks after the All-Star Game break. That's why Bob Boughner's team looked so weak. The opponent dominated from start to finish of the game, outshot the Sharks 41-20, scored 3 unanswered pucks in the end and won. The Sharks had four straight losses. Although 2 of them were allowed just outside of regular time in the games against Eastern Conference leaders Florida and Tampa Bay. There is reason to believe that soon after the failed game with Edmonton, San Jose will get back into a rhythm and become a dangerous opponent for everyone again, even the obvious content players of the NHL season.

Overall, San Jose has 22 wins in 47 games since the league began. The team ranks 13th in the Western Conference standings.

In three games since the All-Star break, Vancouver has had two wins and a loss. And in spite of the unpleasant 3-6 score in the home loss to the New York Islanders, it cannot be considered indicative. There the Canucks completely failed the first period, letting in 5 unanswered pucks by the 17th minute. The explanation is simple: the game against the relentlessly motivated Islanders was Vancouver's second straight back-to-back. In the first, the team handled Arizona, 5-1.

Bruce Boudreau's team made up for the loss to the Isles in the next match by not giving up a single point to one of the strongest teams in the Eastern Conference, Toronto. 3-2 – The Canucks confirmed their high class, which began to show in full measure after the appointment of coach Boudreau. And although Vancouver ranks only 11th in the West, they are 7th in the conference over their last 25 meetings. And Vancouver has won nine of the last 15 road games, losing only four in regulation time.

The rivals have met before this season and also in San Jose. On December 17, Vancouver confidently won 5-2.

Bookmakers consider San Jose to be the favorite of the upcoming game, though with a small advantage. It is hardly possible to support such an arrangement. The opponents, of course, are located close to each other in the standings, but this is only a consequence of the unsuccessful start of the Canucks in this championship. Since the change of coach, Vancouver has improved notably and for the last two dozen games they've been in the playoff zone of the Western Conference. San Jose has been where they are all season long.

Prediction: Vancouver will be closer to a win, although the meeting may go beyond regular time; after all, San Jose needs to make up for the failed game against Edmonton.