St. Louis Blues vs Carolina Hurricanes Prediction: Will the Blues be able to win? 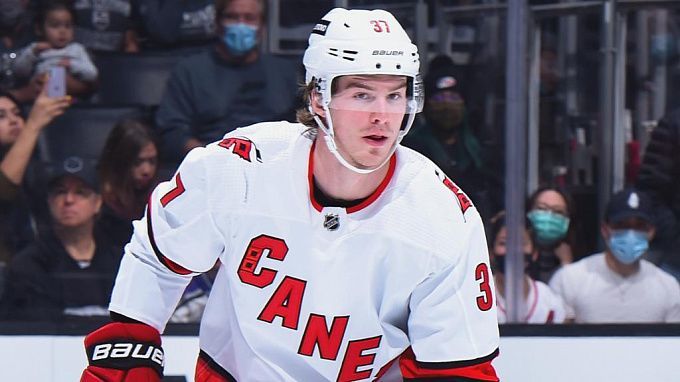 Prediction for the NHL St. Louis Blues vs Carolina Hurricanes match, which will take place on December 2. Check the team conditions and choose several betting options.

The Blues have alternated bad stretches with successful ones in the first part of the championship. Now the team is on a black streak. In the previous game, St. Louis lost on home ice to Dallas (1:4), and before that, they failed to cope with Buffalo and Tampa Bay and beat Florida only in overtime. Currently, one of the strongest teams in the Western Conference is in 12th place in the conference standings but is only sixth in the Central Division, three points back of the top 3.

Like St. Louis, the team has been struggling to produce results late. Carolina won only two of their last seven games, and they've lost only once in regulation time, but they can hardly take credit for that. However, it should be noted that, at this point, the Hurricanes have faced mostly top contenders - Colorado, Winnipeg, Minnesota, and Calgary. And in the Eastern Conference standings, the team ranks high in fifth place.

Just before their trip to St. Louis, Carolina beat Pittsburgh (3:2) in overtime. The Russian Andrei Svechnikov scored a goal+assist for the Hurricanes, who are already 14+10 on the season. Only Sebastian Aho had a better result for Carolina.

The Hurricanes still have their starting goalie Frederik Andersen on the injured reserve. However, Antti Raanta and Russia's Pyotr Kochetkov, who replaces him, are doing a decent job. The absence of one of the team's central forwards, Teuvo Teravainen, has a much more significant effect on the team. Hence, Carolina's scoring problems. The team has not scored more than three goals in the last nine games. St. Louis, motivated by another losing streak, would also be unlikely to achieve. However, the Blues also have problems on offense - an injury to Robert Thomas, the first-line center and the most prolific Blues' player, at the start of the championship. Overall, we should not expect a lot of goals here.

In addition, we give preference to Carolina in the upcoming game. Hurricanes are much more stable than St. Louis, and although they rarely win lately, they also almost do not lose - in the previous eight games, Hurricanes lost only once in regular time.