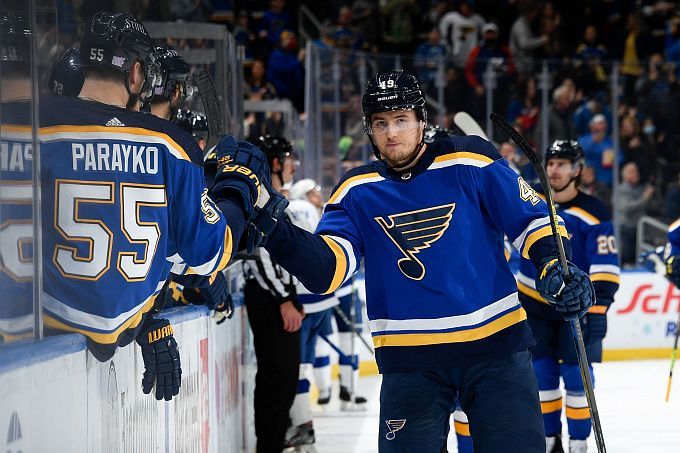 St. Louis has a solid regular season, which is hardly surprising. Almost every year, the Musicians do well in the regular season, but they run into problems in the cup battles. Craig Berube's men have now avoided major crises, suffering only one-off setbacks. Before the break, they suffered two setbacks when they lost to Calgary and Winnipeg, 1:7 and 1:4, respectively. Fortunately, they had several long winning streaks before that, so now the Bluesmen feel comfortable, sitting in fifth place in the Western Conference standings and even higher in terms of points lost.

New Jersey is failing another regular season. It seemed as though they were ready to complete the rebuilding process and could soon become involved in the battle for the top spots, but the reality is much worse. The Devils still don't have a solid lineup that can produce consistently good results, and their occasional flashes aren't enough to contend for a playoff spot. Lindy Ruff's men looked particularly weak in January and February, having suffered seven straight defeats, which were only broken the previous day when they defeated Montreal with a score of 7:1. This local success allowed the Red and Black to move up to 13th place in the Eastern Conference standings.

St. Louis and New Jersey are currently at very different levels. While the Musicians are among the leaders in the West, the Devils are among the underdogs in the East, with no realistic chance of making the playoffs. The day before, the Red and Black managed to beat Montreal with a score of 7:1, but the Canadiens are desperately in trouble right now. We shouldn't expect the Bluesmen to be so lucky. That's why we suggest betting on St. Louis to win with a handicap (-1.5) for 2.00.

St. Louis has a very productive attack in the current regular season. The statistics confirm this, as Craig Berube's men scored 153 goals (3.48 goals per game average) in 44 games played, which is a respectable total. New Jersey, meanwhile, has severe defensive problems. In the previous ten games, they conceded 39 goals (3.90 average per game). Moreover, in the last five head-to-head encounters, the Musicians have scored 24 times (4.80 on average per game). As a result, we suggest betting on an Individual St. Louis Total Over 3.5 for 1.74.

Ivan Barbashev is having the strongest season of his career. In 43 games, he has already scored 34 points (15 goals + 19 assists), while the Musicians still have almost half of the regular season ahead of them. Obviously, the St. Louis coaching staff sees progress for the Russian, which is why he's increasingly finding himself on the front lines. The 26-year-old hockey player is in great shape. That's why we suggest betting on Ivan Barbashev Total Over 0.5 for 4.32.