Vancouver Canucks vs Washington Capitals: the Canucks to win 4th match in a row 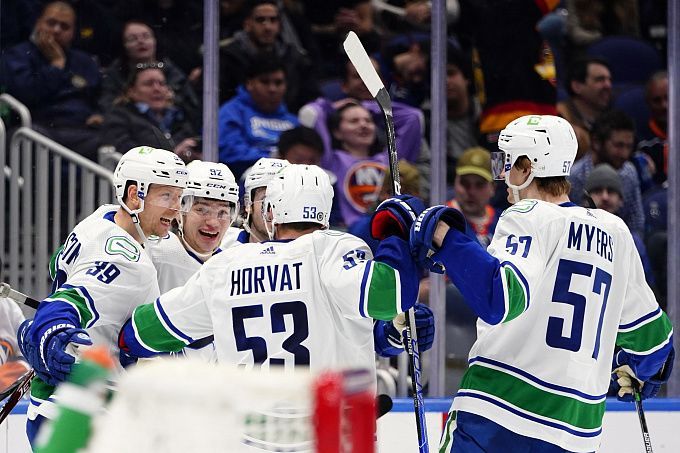 Vancouver has not lost for three home games in a row. Will Peter Laviolette's team be able to break the Canucks' winning streak in a head-to-head encounter? Our prediction: the Canadian club will be closer to success again!

Vancouver looks very powerful lately! The Canucks had a very weak debut in the regular season, but with the head coach, they began to look more positive and now they even contend for a playoff spot. As soon as Bruce Boudreau took over the coaching bench, his players put together a winning streak and continued to score consistently. In the last seven matches, the Blue and Greens suffered only one defeat against New Jersey (2-7), winning the other six matches without fail during the regular time. Their powerful run allowed Vancouver to climb to the tenth spot in the Western Conference standings, three points behind the Final Eight.

Washington are having a very disappointing regular season by their standards. Everything started quite well for the Capitals, but gradually their results began to deteriorate. In 2022, Peter Laviolette's players have already had 26 games, gaining only 11 wins against 15 losses, which they are clearly not satisfied with. After all, the club is used to fighting for the highest places. It seemed that in the beginning of March things started to go well for the Red and Blues, as they defeated Carolina (4-0), Seattle (5-2), and Calgary (5-4), but then they lost to Edmonton (3-4), though in overtime. All this leaves Washington eighth in the Eastern Conference standings.

During the regular NHL championships, the teams have played 100 face-offs. The Canucks celebrated 43 wins, while the Capitals were stronger in 48 games, and the other nine games ended in a draw. The American team is also better in terms of goal difference, 320-318. The rivals have met once this season, Vancouver winning the encounter 4-2.

Vancouver and Washington are having a very different regular season. If the Canucks failed the starting part of the season, improving after the change of the head coach, the Capitals had a decent debut and their results gradually deteriorated. In their last three home games, the Blue and Greens have not lost a single point, but the Red and Blues have lost three times in their previous four away games. Moreover, the Canadians won both of the last two meetings, so we have to bet on Vancouver to win the game at odds of about 1.90.

Recently, Vancouver began not only to win a lot, but also to play very well on offense. In the previous 12 matches, Bruce Boudreau's team scored 55 goals (4.58 average per game), which is a very solid number for such a long distance. On the other hand, Washington's defense has suffered along the way, as evidenced by their 41 goals conceded over the past 13 games (3.15 average per game). Based on this, the optimal betting options seems to be Vancouver's Individual Total Over (3.5) at odds close to 2.55.

Bo Horvat is having another solid regular season. Though he is unlikely to set a personal record of performance, which he did in the season 2019/20, when he recorded 53 points (22 pucks + 31 assists) in 69 games in the regular season, now he has collected a solid figure as well — 35 points (18 pucks + 17 assists) in 53 matches played. Moreover, the Canadian has not left the ice without a productive performance in four straight games already, which confirms his excellent form, so it is worth betting on his Total Over (0.5) at odds of about 3.20.