Winnipeg vs Chicago: the Jets May Get into the Playoffs 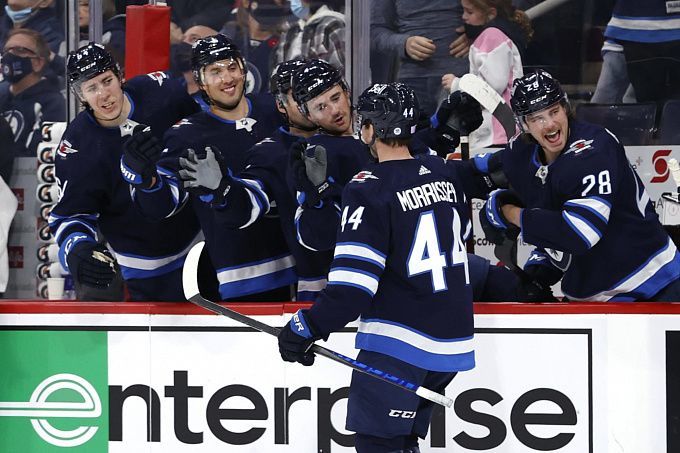 Winnipeg and Chicago are a long way from the Western Conference playoff zone. Both teams probably don't have much to look forward to this season. How will their head-to-head encounter end? Let's pick a few options to bet on at once.

Before the season, the Jets were considered contenders to win the Western Conference. However, the championship for Winnipeg is not shaping up the way you might expect. The team lost longtime head coach Paul Maurice in December, who resigned. That, in fact, was the end of the story.

By the time they face Chicago, the Jets find themselves in sixth place in the Central Division standings. They were 7 points behind the Wild Card West. Not much, but given Winnipeg's instability, not a lot at the same time. The previous game of the team, now led by Dave Lowry, was encouraging, though. On the road, the Jets outscored Nashville 5:2, coming back from 0:2.

What's going on with the Blackhawks can't help but discourage fans of the legendary team. After Jeremy Colliton was fired as head coach, it seemed like things would get better for Chicago, but no. Apparently, Chicago has a weak lineup that simply lacks depth.

The team's stellar veterans aren't dragging the team toward success, either. In the previous game, the Blackhawks lost to St. Louis 1:5. Marc-Andre Fleury conceded a lot again, Jonathan Toews is still injured. Only Patrick Kane, who gave his 33rd assist in this game, is fine.

Winnipeg had a good stretch after the All-Star Game - besides Nashville, the team beat Minnesota and only lost in overtime on the road to Dallas. Unlike Chicago, the Jets are not away from the playoff zone, so that the team will be even more motivated in the upcoming meeting. On the other hand, the Blackhawks can hardly hope for anything serious in this championship. Chicago has only to wait for the offseason, look for a coach to replace Derrick King, and strengthen the squad. Kane and Toews don't have long to play enough hockey to end up on such an understaffed team next season.