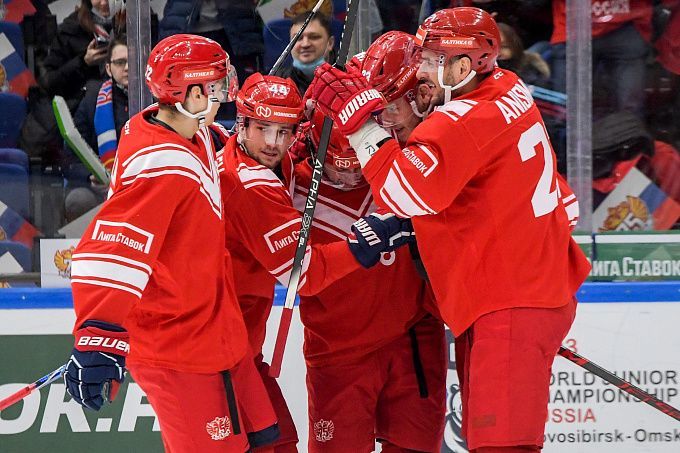 Russia and Finland are still not losing points in the Euro Hockey Tour. Who will be stronger in the faceoff between the leaders of the tournament? Our prediction: Alexei Zhamnov's team will be closer to success!

The Russia national team in Moscow holds their first tournament under Alexei Zhamnov. It is with his coaching staff that the national team will go to China for the Olympics, so now every player is incredibly motivated to get a chance to play in the main tournament of the four years. We can already see the first fruits of the renewed national team in the Euro Hockey Tour, as they managed to beat Canada 4-3, Sweden 1-0, and then the Czech Republic 5-2. Of course, now the Red Machine is leading the standings of the Euro Hockey Tour home stage, ahead of the nearest pursuer already by four points, which guarantees them a victory in the competition.

The Finland national team is another team that is in good shape right now. Recently, the representatives of Suomi have already managed to become first champions and then vice-champions of the world, while playing with a very modestly named squad. And now Jukka Jalonen continues to bend his line, inviting under the banner of the Finnish team not the biggest names of players, but those who fit his system of play. In the Euro Hockey Tour, the Lions started with a victory over the Czech Republic at the O2 arena in Prague (3-2), and in Moscow they have already dealt with Canada (4-1), having guaranteed themselves second place in the tournament.

In recent years, Russia and Finland have played 72 face-offs in all tournaments. The Russians have won 39 games while the Finns have been stronger in 33. The goal difference is also on the side of the Red Machine, 198-150. The opponents have met once this season and the victory was celebrated by the players of the Finland national team, 3-0.

Teams of Russia and Finland approach the face-off, having won all previous matches of the Channel One Cup. In this case, the representatives of Suomi at the Russian stage of the Euro Hockey Tour historically play poorly against the hosts, having lost in eight consecutive face-offs, and almost every time with a devastating score. Now Alexei Zhamnov's players are showing great hockey at their home tournament, so they should extend their successful streak. You can place a bet on the victory of the Russian national team with odds of 1.74.

If you refer to the results of recent matches between the national teams of Russia and Finland in the Channel One Cup, you can be very surprised, as the team of Jukka Jalonen is known for the reliable defense, but in Moscow they concede plenty. In their last six head-to-head encounters, the Lions have conceded 26 goals (4.33 on average per game), which is an obscenely high rate. Now the Red Machine have a good chance to show their mettle on offense with some inspired hockey near the net, so you should consider betting on Russia's Individual Total Over 3.5 goals at odds close to 2.45.

Artem Anisimov is a forward who returned to the KHL in the course of the current season, not having received a decent offer from the NHL. Immediately, the experienced hockey player began to show excellent hockey with Lokomotiv, scoring 12 points (4 goals + 8 assists) in 21 games. Initially, he was not in the roster of the Russian national team for the Channel One Cup, but a series of injuries made the coaching staff still call up the 33-year-old player and, apparently, was not mistaken. He has already tallied two assisted points in two games, so it's worth taking a closer look at Artem Anisimov's Total Over (0.5) points at odds of about 2.10.