Alexander Volkov vs Cyril Gane: A victory for Volkov 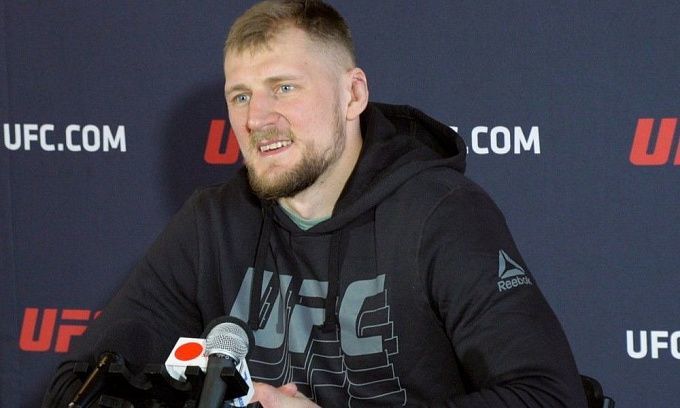 On June 27, early in the morning, Alexander Volkov will fight undefeated Cyril Gan and it's very likely that the winner of this fight will get the title.

Without any reservations, this fight is the main event of Alexander's career so far. He was once close to a title fight but foolishly lost in the last seconds to Derrick Lewis. We hope that this defeat only made Volkov stronger and he will not miss the second chance.

Volkov really pumped up all the things that he got from the fans. He's no longer a skinny guy but has a fair 120 kilograms of muscle mass. He's good at wrestling, just ask Curtis Blades, Volkov won't let himself get beaten like that. Regarding his punching technique, he's pretty good. He can slip into the smallest gap, he can box skillfully at a distance, he changes his tactics depending on how the fight is going.

If you don't believe me, listen to what Alexander Shlemenko says:

Alexander Volkov a very formidable fighter. He only had problems with some of the wrestling styles. In fact, it will be an interesting fight, because the two fighters- will try to knock each other out. My opinion is that Alexander Volkov will be the best. He will work more straightforward, connect with his legs, and he should win early by knockout

He has only eight fights in MMA, five fights in the UFC, only one of the top contenders, and he's already number three in the rankings, and in his next fight, he can fight for the belt. This is an outstanding record.

Yeah, he hasn't been defeated yet, but who has he been fighting? He looks cool compared to lesser fighters, like the fight against Rozenstruik, not flashy. Despite this, Cyril Gane was very effective against the lesser fighters, We can't argue with that.

But Alexander Volkov is not an easy opponent. Cyril has never had a rival of this level. He also has less experience, and we do not know how he will behave if something does not go according to plan. He's good at hitting, of course, but Volkov is better. I think the only thing the Frenchman is better at is his speed movement, but why are the odds so wild?

Prediction and betting on the fight

Gane and Volkov are big, athletic, and powerful fighters, but when it comes to finishes with punches, the Frenchman doesn't have the best record: only 3 TKOs out of 8 wins. Gane mostly works for points. Alexander seems to be tougher and has the impression of hitting harder. The Russian has much more convincing statistics of early victories by punches: 22 KO/TKOs in 33 fights he has won.

But still, the probability that the fight will end early is quite high and the bookmakers offer odds of 3.75 for such an outcome. I'm pretty confident about Volkov and I'll bet on him, with odds of about 2.20.