Ariane Lipski vs Priscila Cachoeira Prediction: Expecting the Queen of Violence to Triumph 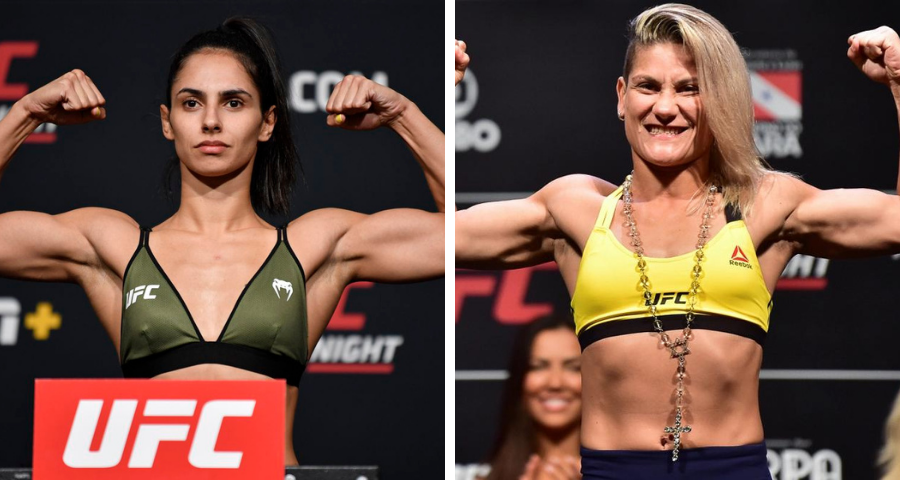 An exciting fight in the Flyweight class is on the cards at UFC on ESPN: Santos vs Hill between former KSW Women's Flyweight Champion Ariane Lipski and veteran Priscila Cachoeira. Even before a punch is thrown in the Octagon, the war has commenced with Lipski drawing attention to the reputation of Cachoeira for fighting dirty by saying in a recent interview that she will be prepared for any “dirty tricks”. The oddsmakers have projected the Lipski as the favorite going into the expected slugfest.

28-year-old Ariane Lipski is a Brazilian with Polish heritage. After becoming Muay Thai champion of Brazil she transitioned to MMA and fought in several promotions in Brazil and Poland before becoming the KSW Flyweight champion. She debuted in the UFC in 2019, starting her UFC career with two losses. She has found the going tough in the promotion with more losses than wins. She made a rebound last year by defeating Mandy Böhm at UFC Fight Night 191. The “Queen of Violence” won the bout resoundingly after twice knocking down Böhm.

Priscila Cachoeira is a striker. I am a striker also. So I’m excited about it. She’s a tough opponent because she doesn’t be afraid to get punched. And I think that the key for the win is my technique. I’m more technical than her. Also, I do believe that I’m a more well-rounded fighter. I have some submissions. So that’s it, I think that technique is key.

Speaking to a fight journalist, Lipski proffered that

Priscila Cachoeira has endured a turbulent life and some of that has manifested in her fighting. The 33-year-old Brazilian faced criticism and anger from fans and media after she gouged Gillian Robertson’s eyes in December 2021 at UFC 269. Cachoeira was trying to escape a rear-naked choke in a fight she eventually lost. Earlier on in 2019, her proposed matchup with Lipski was canceled after Cachoeira tested positive for diuretic. She was suspended by USADA for four months. In her last fight against Ji Yeon Kim in February, 2022 at UFC Fight Night 202, “Zombie Girl” won via controversial unanimous decision with many in the media scoring the match for Kim.

Lipski claims that she has the better technique of the two fighters. We tend to agree with her as Lipski, though not at the highest levels of the sport - has enough power and grappling technique to overcome her compatriot. “Zombie Girl” has exhibited deficiencies in grappling and wrestling and may not be able to withstand the powerful punches of Lipski. Even though Cachoeira has some decent power of her own, the tendency of Lipski to want to go to the ground will be a big advantage for the “Queen of Violence.” We definitely expect violence, two strikers slugging at each other and maybe a reaction or two from Cachoeira. All said a victory for Lipksi is all but sure. And unanimous we predict.