Denmark vs Latvia: Don't expect spectacular hockey from the opponents 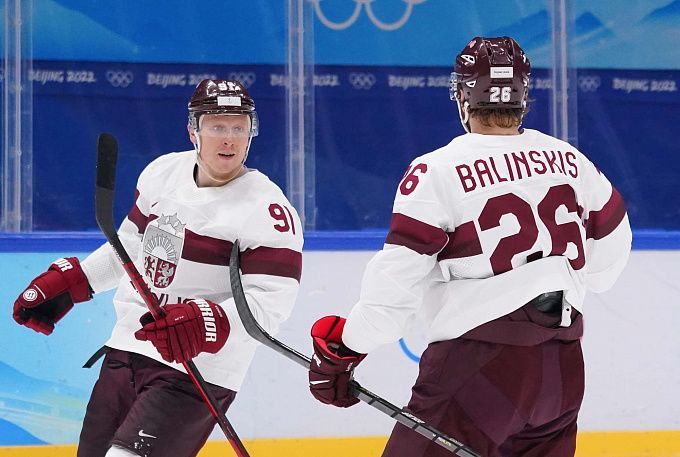 The Latvians have beaten the Danes 3:0 and 1:0 in their last two head-to-head encounters at the World Cup. Will Harijs Vitoliņš's side manage to be stronger again? Our prediction: the Latvians will certainly have a chance!

Denmark qualified for the Olympics for the first time in its history, but in the group stage, they performed as a seasoned participant in such high-profile tournaments. In the first game, Heinz Ehlers' team created a sensation, beating the Czech Republic 2:1. Later the Vikings gave a real fight to the Russian national team, although in the end, they lost with a score of 0:2, and the second goal they conceded in an empty net with five seconds to go. This local failure did not break the Danes, who won a volitional victory over Switzerland (5:3), which allowed them to finish in second place in the standings.

The Latvian national team regularly performs at major international tournaments, and their squad doesn't change that much. Therefore, one would expect the experienced team to solve severe problems at the Beijing Olympics. Indeed, in their two opening games against the Group C favourites Sweden and Finland, Harijs Vitoliņš's men put up a real fight and looked highly resilient. However, they suffered two defeats, 2:3 and 1:3, respectively. It had seemed that the Latvians would play their best against Slovakia, but in reality, they were beaten 2:5, suffering poor hockey and finishing in last place in their quartet.

The Danish team has been much more successful in the group stage than Latvia, but Harijs Vitoliņš's side benefits from experience on the eve of the qualification round. The fact is that the Latvians regularly play in major international tournaments and have a solid core team, with most of their hockey players playing for Dinamo Riga. The Danes, who sensationally won two games in Beijing, cannot do the same and will play a different kind of hockey in the playoffs. Moreover, the Latvians have won their last two head-to-head games. Therefore, we suggest betting on Latvia not to lose in regulation time for 1.78.

The Danish and Latvian teams have a very modest goal-scoring record. In their last five head-to-head encounters, the teams have combined for just 14 goals (2.80 goals per game average) without overcoming the total over in this stretch. Now, there are no signs of that changing since both teams showed at the group stage that they could defend well in case of need, and there'll certainly be a chance to do so in the playoffs. With this in mind, we suggest betting on a total under 4.5 for 1.75.

Renars Krastenbergs is one of the few Latvian internationals currently playing for Fillach in the Austrian league. He's already scored 27 points (15 goals + 12 assists) in 30 games during the regular season. He looked great for the Latvians at the Olympics, and he is the team's leading scorer with a goal and two assists in three games. Now, we suggest betting on Renars Krastenbergs Total Over 0.5 for 1.8.