Aslan Karatsev vs Karen Khachanov Prediction: Betting on a Confident Win for Karen 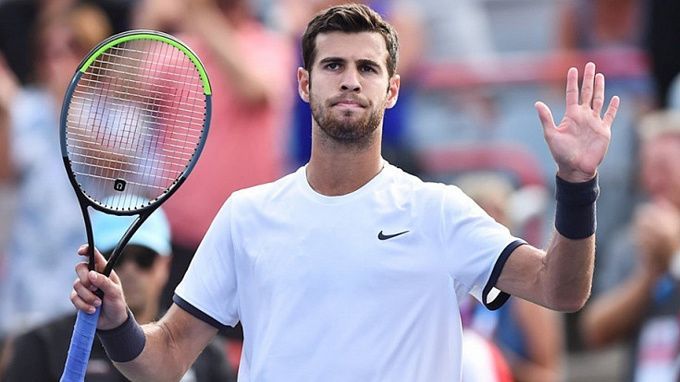 In the first round of the tournament in Halle, Aslan Karatsev, No. 38 of the world ranking will fight with the No. 23, Karen Khachanov. Bookmakers believe that Karen has an excellent chance to win the upcoming game, having better form and playing practice.

Aslan's unfortunate streak continued. After losing to Novak Djokovic at the Rome Masters, he failed in Lyon to Mannarino, Ugo Carabelli at Roland Garros and Stricker at Stuttgart. The match against the latter lasted an hour and 27 minutes, the guys played a tie-break in the first set and the Swiss won the second game 6-1. Overall, Karatsev served 6 times and made 4 double faults, winning 71% of points on the first serve and 36% on the second. Aslan had the following statistics on the receiving end: 31% on the first and 48% on the second.

Karen played well at Roland Garros, reaching the 4th round but losing to Alcazar in three sets. After that, Karen went to the Netherlands, where he won over Tabilo and Majchrzak and gave up on Auger-Aliassime. The match against the Canadian, although it was a two-set game, was quite a long one. The guys got a tie-break in the first game, and Felix won the second game by 6:4. On that day, Karen was serving poorly, with only one ace and two doubles, 71% of his first serve points and 54% of his second. On receiving, Khachanov won 15% on Auger-Allassim's first serve and 44% on his second.

Not long ago Karatsev and Khachanov were competitors for the title of No. 3 in Russia. However, after Aslan's failure at a number of tournaments, Khachanov has pulled away from Karatsev in the rankings. Karatsev's current tone upsets his admirers, while Karen has been performing steadily so we doubt that Khachanov will have any problems achieving the necessary result on Tuesday. We bet on a solid win for Karen over Aslan.