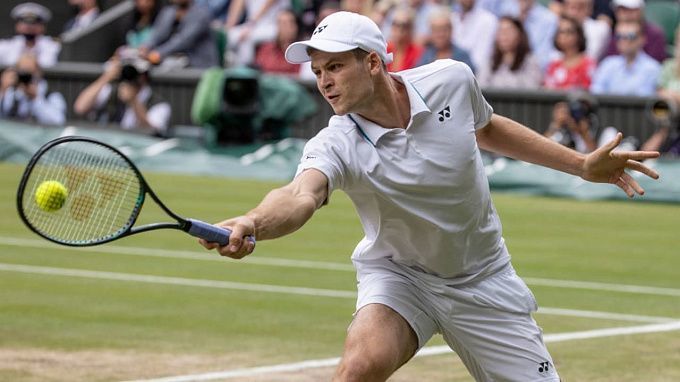 In the finals of the Halle tournament, the world number one, Daniil Medvedev will face the No. 12, the Pole Hubert Gurkacz. The guys know each other well, they have played four times in the tour and the score of the confrontation is 2:2, and Hubert won the only grass match. But despite these statistics, the bookmakers side with Daniil.

For Daniil the Halle final in Hull is the second grass this season. Recall that the first final in Hertogenbosch, Medvedev failed to Tim van Rijthoven in two sets. In Germany, Daniil has not lost a single set so far, knocking out Goffin, Ivashka, Bautista Agut and Otte. As we thought, the duel against the latter was not short, the guys got a tie-break in the first set, and Medvedev won the second game 6:3. Overall the match lasted an hour and 36 minutes, during which Medvedev scored eight aces and four doubles, winning 75% of his first-serve points and 48% of his second. On reception Daniil had 19% of points won on the first serve by Otte and 59% on the second.

I was not playing good enough in the beginning of the match. I was missing too many shots. The serve was actually not that bad, but I was missing way too many shots. I managed to change it by the end of the first set, especially in the tie-break. That’s when I started to miss less, play more aggressive and get depth on my ball. Second set I just continued throughout, and it was enough to break him one time and get the second set.

Frankly speaking, we were a bit surprised by Hurkacz in the finals. We expected that Medvedev's opponent would be Nick Kyrgios. We had no doubt that the Pole would take a set, and give a fight to the Australian. The match lasted over two hours, Hubert lost the first set 4-6, but won the next two on tie-breaks. He showed quality tennis and a great will to win. Hurkacz had 27 aces and one double fault, winning 78% of his first-serve points and 79% of his second. That's an amazing statistic. On the receiving end, Hubert won 19% on his first serve and 42% on his second. We think if he wins in Halle, Hurkacz will definitely return to the top 10 of the ATP.

We think the bookies are underestimating Hubert, making him such a big underdog. He knocked out Auger-Aliassime and Kyrgios while Medvedev had no such strong opponents in Halle. The Pole is very good on his serve, and Hubert has not only the first serve, but also the second one. We expect a very tight match. The fate will be decided by several draws, waiting for at least one tie-break and not surprised if the Pole is stronger in the end.