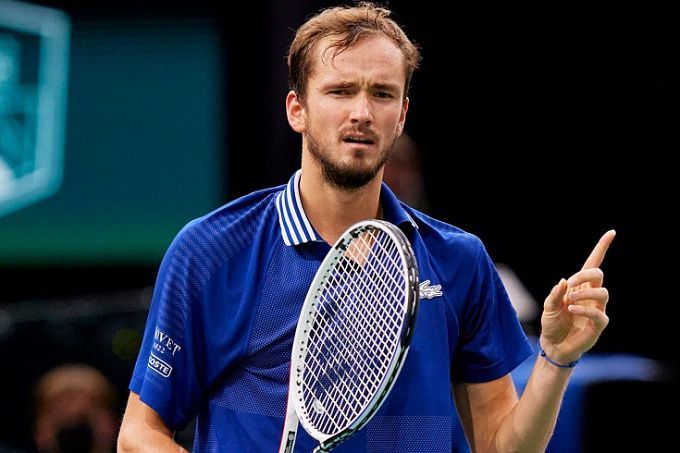 The quarterfinals of the Cincinnati Masters will open with a match between world number one Daniil Medvedev and ATP No. 13 Taylor Fritz. The men have played each other only once before, during the coronavirus situation on clay courts, and the American won that match. Despite this fact, the bookmakers are on the side of Daniil.

For Medvedev the upcoming match will be the third in Cincinnati. He already beat van de Zandschulp and Shapovalov, both in two sets. As expected, Daniil defeated the latter, but it was barely an easy one for him. The duel lasted one hour and 47 minutes, Medvedev won it by 7-5, 7-5. In spite of winning in two sets, Daniil was not perfect with his serve making only four aces and five double faults. He got 78% of his first serve and 61% of his second. On the receiving end, Daniel had the following statistics: 38%/48%, 27/19 of winners/unforced errors.

We're glad to see the American after he defeated Rublev in three sets. Before that Taylor knocked out Baez and Kyrgios. His match against Andrey was a three-set contest, Rublev won the first game on a tie-break, but gave up the second set 2-6 and the third 5-7. Fritz had a high quality game, with a 44/26 winners/unforced errors being good on first serve: 13 aces with 6 doubles and 83% of points won. On second serve Taylor won only 48% of points, obviously the American, as well as Daniil, was not very good on second serve. On the receiving end, Fritz had the following statistic: 23%/55%.

Taylor looks good at the Cincinnati Masters, knocking two strong opponents out of the draw. Plus, under certain circumstances, reaching the semifinals could guarantee Fritz a place in the top 10, which is not a motivation for the American. But Medvedev also dreams of winning the Masters in Cincinnati after his fall in Montreal, which means we can expect a prolonged match. As for the outcome, we're on Medvedev's side. Fritz is great now. He doesn't make many mistakes and serves very well. Nevertheless, Daniil outclasses his opponent, which should affect the final result.