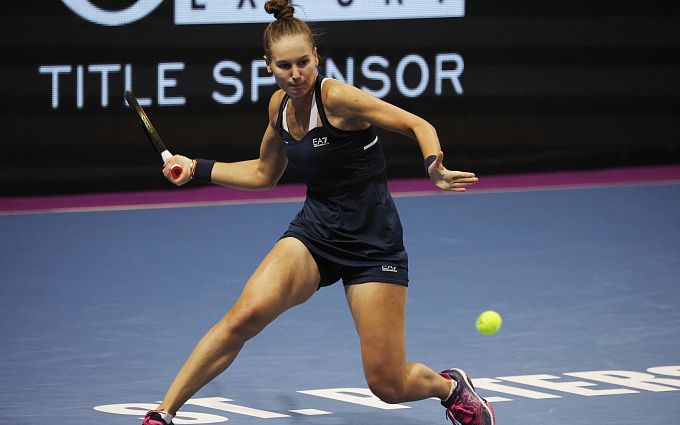 Veronika Kudermetova will face Jelena Ostapenko in the WTA Dubai final. The athletes have not played each other in the tour yet, and bookmakers consider the Latvian athlete to be the favorite.

Last week Jelena played in St. Petersburg where she reached the semi-final but lost to Kontaveit in two sets. Ostapenko played four matches here in Dubai and knocked Kenin, Swiatek, Kvitova and Halep out of the grip. That's an impressive list of wins, don't you think? Ostapenko was looked at as a big outsider against Halep and lost the first set 2-6. The breakthrough was the second set, when Elena won on the tie-break. It had Simona falling apart and she failed to win even one game against Ostapenko in the third set. During the match against Simona, Elena served three times and had five double faults. She won 74% of points on her first serve and only 37% on her second serve, which is a clear sign of the Latvian player's weakness. On receiving, Ostapenko won 35% of points on Halep's first serve and 31% on her second.

«I knew I had to play aggressive. Simona doesn't like to play against players who are playing aggressive and take time away from her. I had to attack even if I missed sometimes. I think it helped me to win.»

Kudermetova did not play the semi-final because Vondrousova withdrew from the tournament, citing an injury. Despite this, Veronika also has an impressive list of victories in Dubai. Besides Teichmann, who was defeated in the quarter-final, the Russian was stronger than Muguruza and Azarenka, and Veronika defeated Victoria in two sets. However, the fact of an injury of the right hip is bound to make you careful betting on the Russian. For example, in the match against Vondrousova we considered the Russian to be a deserved underdog. It's interesting that immediately after the face-off Kudermetova and Ostapenko will meet again, but in the doubles final. The Russian will play with Mertens and Ostapenko with Kichenok from Ukraine.

The athletes have yet to play each other, which complicates placing a bet. Ostapenko has a great record of victories in Dubai, but Veronika has also beat two top players in the UAE: Muguruza and Azarenka. Yesterday, Jelena had a difficult three-set match against the former world number one, while Veronika had a chance to rest because Vondrousova withdrew from the draw. We think the bookmakers are somewhat underestimating Kudermetova and the line should be closer to even than it is. We bet on a plus handicap for Veronika and a win for the Russian: H2 (+3.5) for 1.87; W2 for 2.50; W2 for 2.52.