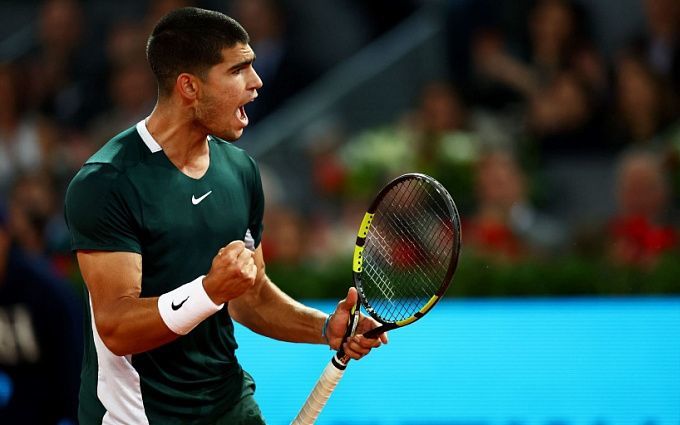 The centerpiece of the Madrid Masters quarterfinals is this match between Nadal and Alcaraz Garfia. Not long ago, at the Masters in Indian Wells, they met each other for the second time in history, that match won by the king of the clay. However, the tennis players are in different tones, Nadal is not shining yet, so the young Spaniard has a good chance to beat the great Rafa for the first time in his career.

Goffin did not give up the match so easily against the #4 in the world. The Belgian not only won a set, but was close to winning the match. Nadal outplayed Goffin in the third set on a tie-break, which ended with a score of 11-9. The match lasted three hours and 13 minutes - the match was the jewel of the tournament. It also exposed Nadal's problems that we already knew about. On the plus side for betting on Rafa the fact that the Spaniard got good playing practice and improved morale due to this victory. However, the fight took a lot of strength, and given the poor physical condition of the #4 and the existing health problems, it is clearly a disadvantage.

I leave the match very, very happy. You have to be sincere with yourself ... my preparation has not existed. You cannot expect great things at the beginning. All trainings have had some up-and-downs, it's been a roller coaster. I have had better days, worse days. At the end of the day, the rib is a problem that limits your game a lot

Rafael Nadal about his injury recovery

For Alcaraz Garfia the tournament in Madrid is the third clay one of the season. The Spaniard started in Monte Carlo, where he left after the first game against Korda. In Barcelona he took the trophy, beating De Minaur and Carreño-Busta. In Madrid, Alcaraz Garfia had two fights and knocked out Basilashvili and Norrie. The match lasted two hours and 41 minutes. Carlos won the first set 6-4 but lost the second on a tie-break. The third game turned out to be the most transient, lasting 40 minutes, the Spaniard won it 6-3. In his match against Norri, Alcaraz Garfia served seven times and made four double faults, winning 71% of his first-serve points and 44% of his second. He was so good on receptions: 25% of Norrie's first-serve points and 58% of his second-serve points. Clearly, Alcaraz Garfia needs to improve his second serve to beat Nadal.

We believe that Alcaraz Garfia will win today. He is very good on hard and clay courts, proving it with a win at Barcelona. There defeated tough Tsitsipas who won the Masters in Monte Carlo before that. Nadal is still just gaining form, an injury still bothers him, it's all on the downside. But Rafa is a fighter, he won't give up the victory so we expect a long match - perhaps, 3 sets or more. Moreover, Alcaraz Garfia might deal with the great Nadal in Madrid for the first time.